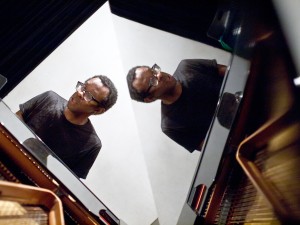 “Of course somebody might put something together that’d be hard to trace, but there is nothing new under the sun if you look at it in a certain way,” New York-based pianist Matthew Shipp says.

In talking music, the thirty-year veteran of the Northeast’s out-jazz scene takes a jocular tone, mixing heavy proclamations with occasional laughter at his own comments. Sometimes, they’re really that amusing.

Weaving his way through the 1990s as a part of the David S. Ware Quartet took an already inspired player and set him amid a group helmed by one of the most powerful saxophone voices of the last several decades. It might be a stretch to include Ware, who died in October 2012, among the Coltranes and Sanderses of the world—but not a huge one.

“We were soulmates and meant to play together,” Shipp says about his time with Ware. “He has a power to write phrases with gravity and weight. … I think seeing how he dealt with his lines and his musical vocabulary … it opened up a lot of pathways in my brain.”

Shipp’s time in Ware’s company wasn’t all supplication, though. The pianist recorded incessantly during the decade, and today counts upwards of thirty dates under his own name. The pace of recording and relentless thought put into Shipp’s work is evident. But practicing to play spontaneously seems like a contradiction—one the pianist quickly clears up.

“There is no pure improvisational music—that’s just a myth,” Shipp begins in an elevated pitch. “People will say something about Hendrix or Charlie Parker and that’s garbage. If you found somebody who could get up on stage and make up something new every time, they’d be the greatest genius in history.”

There’s birdsong, at least. But all human beings can do is wonder at the loping lines dripping from tree branches across the world. Shipp bifurcates musical improvisation with sparring sources of generation. There’s comfort and discomfort.

“[T]here’s the Derek Bailey way, who never wanted to play with people [he knew]. He wanted a complete abyss of not knowing people’s motives,” Shipp says. “The other way to look at it is to have a group of people who play together—if you look at the history of free jazz, there’re established groups we know—the Ornette Coleman group, the Coltrane quartet. And it’s based on a disciplined approach of knowing your bandmate’s vocabularies and motives.”

Being aware of players’ palettes seems essential. But Shipp admits personality—his own, specifically—can overwhelm a group performance. Like any ensemble, his current trio—bassist Michael Bisio and drummer Whit Dickey—needs to be carefully considered while writing and practicing. The metaphysical world of music crops up pretty frequently in Shipp’s comments without overt reference to overcoming a situation—performative or otherwise. But Shipp admits getting the sounds he hears in his head out through the piano won’t ever stop being a taxing task.

“I think every musician struggles with his instrument … [it’s] finite and visible,” he says. “Whatever concept you have in your mind may not be usable—your instrument can betray it. So, you’re always trying to get to the area of pure concept. … to bypass the actual mechanics of that finite instrument in front of you.”

The way some folks attempt at moving beyond limitations of an instrument is to build one—an approach those in the noise community have been adept at since the salad days at Mills College. So, while there’s a commonality between free jazzers and circuit benders, the crossover doesn’t always go down smoothly.

“David [Ware] never liked doing shows with noise rockers,” Shipp says, although his ensemble opened for Sonic Youth on at least one occasion. “We did a festival once in Scotland when Keiji [Haino] was on the bill, and David was having a lot of problems. … It just didn’t speak to him. And he was freaked out that people who liked that would possibly like us.”

It may have been a perceived lack of grace Ware took issue with as Haino wailed on his guitar. But for everyone who would doubt the approach, there’s one person who can understand noise as beauty and love songs as off-kilter experimentation.

“Things can move fast and move slow at the same time. … The theory of relativity—it’s all kinda slow, anyway,” Shipp postulates. “On one level, there’s no movement in music at all. On another, everything’s in flux. There’s a switch you can click in your head, and decide to hear something as a ballad or not.”

His latest disc might prove that to an unknowing ear. Like a knotty “Goldberg Variations,” Shipp’s solo “Piano Sutras” can lull listeners into a place where the music can be playing but go unnoticed. There’s a fair share of dissonance, which should keep folks from wondering away, but the careening lyricism of Shipp’s performance across twelve tracks disallows even the most jarring chord clusters from being more than pleasant musical pontificating. His solo work won’t rank as traditional fodder to stuffy jazzbos. But Shipp’s pretty sure the genre doesn’t even exist any longer.