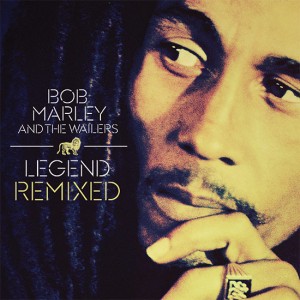 When music magazines make “best albums of all time” lists, Bob Marley & The Wailers’ “Legend” often makes the top fifty or 100. Given that Bob Marley’s music seems to win over fans who were not even around when cancer took him away from us in 1981, it feels right for the music to receive a face-lift through a dedicated remix of the entire disc in the hands of his sons Ziggy and Stephen plus a roster of MCs that include Thievery Corporation and Jason Bentley.

With so many different points of view, the results are mixed. Bentley’s treatment of “Three Little Birds” is quite respectful, preserving many of the original elements of the tune (keyboard, vocals) while adding a few contemporary elements. Roni Size’s transformation of “I Shot The Sheriff” is taken to a completely different territory, with many electronic elements taking over Marley’s original approach. Stephen Marley just makes a few changes on “Buffalo Soldier,” while Thievery Corporation takes “Get Up Stand Up” to a more trance-like territory.

“Legend Remixed” is a journey in rediscovery certain to introduce younger audiences to the magic of Bob Marley’s music, while more traditional fans will hear the songs through a different prism. Diehards, however, might be a bit thrown off by the more adventurous remixes. (Ernest Barteldes)