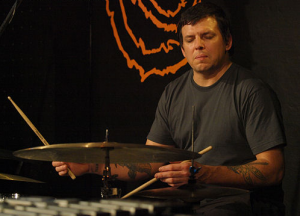 This is what I’m reminding myself as he stabs my chest thousands of times per minute with a tattoo needle. In Sacrament Tattoo, Iron Maiden’s “Killers” is spinning in the background. Herndon can’t help but drum along during the idle moments as he dips the needles into a tiny pool of black ink. I hear the tattoo gun buzz on and off in rhythm with the kick drum of the tune, and somehow manage to grin through the flesh-ripping pain.

As drummer of Precious Wax Drippings, Poster Children, Tortoise, Isotope 217, 5ive Style, The Eternals and about a half dozen Rob Mazurek-helmed projects, Herndon has proven himself an adept player of nearly every style of music. From punk rock to funk, from musical theater to dub, from hip-hop to jazz, Herndon’s résumé is as long and varied as it is distinctive and innovative. The feat seems especially impressive when I find out later that he effectively flunked lessons from David Garibaldi and Murray Spivak, both award-winning percussionists. This, of course, was some time ago, during a lost, senior year of high school, spent immersed in the Californian skate-punk culture of the Circle Jerks, Suicidal Tendencies and Fear. Herndon is set to return to the West Coast in August, leaving behind Chicago with an unassailable body of work spanning the better part of three decades.

Lately, as I am finding out firsthand, he’s been pursuing other creative impulses. “One of the ground rules that was inspiring to me about punk rock and skateboarding, too, and living a creative lifestyle is the idea of ‘fake it til you make it,’” he tells me. Indeed, there is a homespun quality to the tattoos Herndon has been producing, but charmingly so, and it is clear that his non-traditional gamble in do-it-yourself experimentation has been the hallmark of an illustrious career. Who else would be bold enough to ask, “you wanna learn how to play the vibraphone? Get a vibraphone and start a band.” There is something disarming and characteristically Midwestern about the orientation, which may speak to Herndon’s relocation here.

Born on the East Coast, in and out of foster homes with an older brother, Herndon eventually reunited with his father and relocated to Madison County, North Carolina. There, Herndon was exposed to the primal elements of existence through the communal living of Earth Guild Grateful Union Family Trust. Farming, livestocking and a commune-style upbringing provided the hard-fought spirit that grounds much of Herndon’s artistic attitude today. Sunday night gatherings sang the sounds and set the stage for a proper musical nurturing. The evenings were marked by his first exposure to traditional Appalachian music, jazz and, most importantly, the drums. Sensing something special in their child, his father and stepmother made sure to supplement his makeshift kit of books with an actual drum set. Their support never waned. Herndon found himself gigging professionally in a local cover band full of adults by the age of fifteen. Barring a brief sojourn to Los Angeles his senior year of high school (prompted by the popular trend to drink and drive along winding mountain cliffs), it took young love to move Herndon Midwest.

By virtue of his new living arrangement, Herndon was quickly recruited to drum for Maestro Subgum and The Whole, an outfit largely indebted to the experimental theatrics of Bertolt Brecht. It wouldn’t take long before he caught up with Bill Little and joined Precious Wax Drippings, an outlet for his proper punk impulses. Even then, Herndon sensed something was awry. “I just wanted to hear energy pouring out of people. I just wanted to hear something that was going to lift me out of my seat. It didn’t matter if it was Billy Cobham playing a billion notes, or Chuck Biscuits. I needed a way to focus energy in a physical way.” A budding relationship with bassist Doug McCombs, largely based on a mutual love for skateboarding, seemed to have provided that release.

An aptly timed exposure to the right records further cemented Herndon’s experimental leanings. “And then I discovered the record ‘Nefertiti’ by Miles Davis. And that record made me realize the potential of the music. I heard that band, I heard Tony Williams playing on it, and how it was like super strong and aggressive, and beautiful and subtle, and the way time moved was very malleable, and had all these elements to it that made me start to search for more music like it.”

His journey continued with Mingus’ “Black Saint and the Sinner Lady.” “I just thought it had all these crazy elements, and it was really well thought-out conceptually, and the arrangements were amazing and moving, and it gets really high-spirited, and I just thought it had the energy of punk rock to me. Like when Dannie Richmond is really like, making the band like… cookin’ like that. And I was like ‘OK, yes. There’s everything in this music and it can be beautiful and intellectual and fiery.’ So it had all these elements that really attracted me to it. I felt like what I liked about punk rock was missing a lot of… was missing something. It felt very boxy.” Enter jazz.

During prolonged jam sessions with McCombs, Herndon and a few other like-minded musicians ran down Coltrane’s “Africa/Brass.” The duo booked time for their own compositions at Wicker Park hallmark Idful Recording Studios. At the time, Wicker Park was experiencing a flurry of artistic expression. Liz Phair, Hum, Trenchmouth, Sunny Day Real Estate, Red Red Meat, and The Sea and Cake all received the engineering aid of Brad Wood at Idful, and embodied the progressive spirit surging through the area. When the day arrived, McCombs and Herndon were joined in the studio by John McEntire and Bundy K. Brown of Bastro, and Tortoise was born. The group later went on to record 1996’s legendary “Millions Now Living Will Never Die,” which still stands as a wonderful amalgamation of rock, jazz, dub and electronic music, truly representative of Chicago, a city known as much for its dramatically segregated communities as for its enriched expression of authentic culture.

At the very same time, Herndon was also moonlighting in Isotope 217, a group which featured future collaborators in Jeff Parker and Rob Mazurek. The latter’s influence proved especially fruitful, as Herndon and Mazurek have gone on to perform together in a wide array of recordings, often bringing out the best in each other. Whether under the guise of Mazurek’s myriad group configurations (Rob Mazurek Quintet, Pulsar Quartet, Octet, etc.) or with the band Starlicker, featuring the potent addition of Jason Adasiewicz, one cannot overestimate the impact the two musicians have had on each other. Of Mazurek, Herndon explains, “He’s been really supportive of me as a player and has recruited me in a lot of his projects and I feel super grateful to be involved with him. I think he’s an amazing player, he’s an amazing person to hang out with, one of the most loving and gracious people I’ve been lucky enough to know.” Rest easy knowing it’s a high priority for Herndon to keep the collaboration alive even after his move out west. 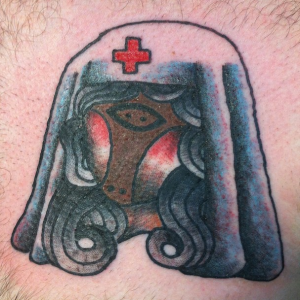 In an attempt to calm my nerves after I jolt from the pain searing through my chest, Herndon asks about my prospects for fatherhood. I explain that I’m not a dad yet, but I quickly sense his passion for his two children. They are the reason he is relocating, as his ex-wife pursues an opportunity out west. He’s been taking care of me throughout the session, offering a kindness unique to his personality. As a drummer, Herndon’s style is marked by a certain sense of selflessness. He can float in and out of a tune, trade off aggression for minimalism, exhibit manic skill or straightforward simplicity. Most importantly, Herndon has an empathy and grace that is unmatched in local creative improvisational music. He intuits what is called for and is equally bold when called on to lead. His regular playing in Chicago will be sorely missed.

As he’s finishing up, I am grateful for the relief. I am even more grateful when I see his parting love letter to Chicago adorning my chest. “The Rose of No Man’s Land” is both a song and a tattoo tradition. Budding from the gratitude of those wounded in the First World War, the tune features the lyric:

It’s the one red rose the soldier knows,
It’s the work of the Master’s hand;
Mid the War’s great curse, Stands the Red Cross Nurse,
She’s the rose of “No Man’s Land.”

The design for the tattoo traditionally features the white, long, flowing cap of the nurse with the Red Cross logo emblazoned on the center. Soldiers got the tattoo in honor of those who saved them, and often the image of that angelic nurse’s face would be the primary feature. In Herndon’s case, he’s chosen the face of the untitled Picasso sculpture that sits in Daley Plaza. It’s a wonderful reminder that art can be a saving grace to a city fraught with corruption and violence, and it takes a special talent to unite respect for tradition with ambition for progress. John Herndon’s contributions in this regard will be heartfelt in his absence for decades to come.