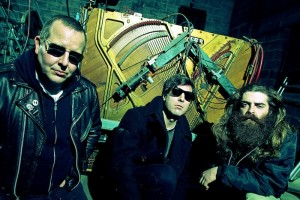 Even if you hate the idea of noise as music—and you have the right to—the sheer breadth of work connected to the Wolf Eyes pack should be impressive enough to wade into the mire. It’s not an easy task and the hundreds of tapes, lathe cuts, LPs and other sundry releases make taking in the Midwesterner’s work even more difficult. But paying attention to any randomly selected song (or screed, if that works better) can reveal a properly pieced together pastiche of music. And with its latest release through the De Stijl imprint, “No Answer: Lower Floors,” the ensemble, which has been joined by guitarist Jim Baljo after Mike Connelly’s departure, continues the somehow varied squalor of its past on works like “Choking Flies.” The industrial tint and out-poetry continues amid an electrical, twisting buzz. No rhythm actually emerges, but the sound of a tortured clapboard crops up frequently enough to suggest one. Discerning what’s going on and what the band’s getting at lyrically isn’t ever going to be readily apparent. But just like divining musical intent from the exploration of sounds, listeners can create meaning from understood snippets and words. The translation likely won’t be what Wolf Eyes intends, but whatever the most explorative electronic pioneers intended for the genre couldn’t have reached this apex. Claiming “No Answer” as the band’s peak would be akin to a parent choosing a favorite child. Of course, the entirety of Wolf Eyes’ output’s a weird birthing trick, taking up almost two decades of these men’s time. A substantial reckoning is required just to make it through this almost forty-minute trek. But with the stubbornly positive high-pitched tone wavering behind “Chatter Lead” and the jabbering pulse of the album’s twelve-minute closer, each track can offer a bit of insight into not just the band but purposeful art making in any discipline. (Dave Cantor)