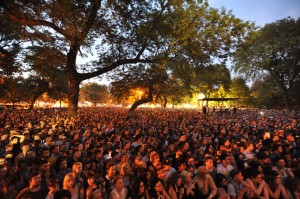 Summer rolls on in Chicago, and with it comes a staple of the summer music scene: the Pitchfork Music Festival. This year, Pitchfork  takes place July 19-21 in Union Park, and features dozens and dozens of acts. The headliners will probably occupy most of your attention when checking out the lineup (R. Kelly!!) but there are many up-and-coming musicians playing the festival who are definitely worth checking out. Here is a quick guide to five of them.

Several mixtapes released over the past year have helped restore a sense of energy and national recognition to Chicago hip-hop that’s been missing since Kanye dropped “The College Dropout.” Two extremes have emerged: the angry lyrics and pounding beats of Chief Keef on the one hand, and the warm soul of Chance the Rapper on the other. The music of Tremaine Johnson, who raps as Tree, exists in between those two. Tree refers to his brand of music as “soul trap.”

“Soul trap is a soulful sample that I remix with a hard drum and my whole delivery is from a soulful stance. It’s like reality rap, like blues rap,” Johnson says. “I grew up in the projects, and I keep it to a reality-driven point. That’s the effect of being in Chicago.”

The beats combine the soul samples of Kanye and Chance with pounding 808s, and Tree raps over them with a bluesy rasp. Be sure to brush up on soul trap with the recently released mixtape “Sunday School II: When Church Lets Out” before Tree’s 1 pm set on Sunday of the festival.

If you spent most of 2012 listening to Usher’s “Climax” and wondering how you could get more, allow me to introduce you to the music of Autre Ne Veut. Bringing up his name in conversation may make you seem like a pretentious asshole (it’s French for “want no other”; actually kind of cute), but his haunting R&B songs will hit you in the heart. As with How To Dress Well, you could probably refer to Autre Ne Veut as “postmodern R&B;” Arthur Ashin uses the musical tropes of R&B without being “sexy” in the warm way of, say, “Brown Sugar”-era D’Angelo, and therefore, it may not seem “legit” to R&B purists. But either way, it is beautiful, emotive music. “Anxiety,” Autre Ne Veut’s second album, was released at the end of February, and it remains one of my favorite records from the year so far.

This has been a strange typical summer in Chicago. Current conditions notwithstanding, humidity and hot temperatures have been hard to find. This type of weather may not have had you aching for summertime jams to play at the pool, but Mikal Cronin delivered some anyway. His album “MCII” is full of the breezy guitar rock that makes you want to roll windows down. Pitchfork has gotten hot in years past, which might make it an ideal environment for his Friday set.

If you were able to put aside your distaste for Kanye’s full-frontal narcissism to listen all the way through “Yeezus,” you know that one of the best songs is “Blood on the Leaves,” and you know that it’s one of the best songs on the record because it manages to combine a mournful, discomforting sample of Nina Simone’s “Strange Fruit” rendition with drums that redefine the adjective “pounding.” I mention this because those drums come courtesy of TNGHT, the collaborative project of producers Hudson Mohawke and Lunice, who will be bringing their trap beats to Pitchfork on Sunday.

Being lazy never sounded so fun. On their latest album, “Light Up Gold,” Brooklyn four-piece Parquet Courts made energetic punk songs about topics like marijuana-induced munchies and not knowing what to do with your time. But though they describe boring situations, the music is anything but: energetic punk rock interspersed with such eclectic proclamations as “Socrates died in the fucking gutter!” If you want to see just how punk tedious lifestyle can sound, check out Parquet Courts’ Saturday set at Pitchfork.