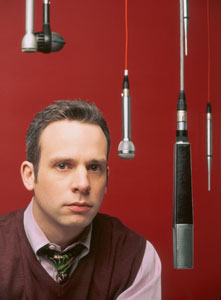 28 John McEntire
Owner, Soma Studios
To watch John McEntire drum for Tortoise is to witness a man fraught with concentration. The look belies his good fortune, which has been fully realized over the past decade with Soma Studios. When Wicker Park hallmark Idful closed shop, McEntire was forced to begin anew with Soma, where he’s gone on to do quite well, so well that Soma has now absorbed Engine Studios and added its producer extraordinaire to its stable. Add to that engineering credits on the last Yo La Tengo and Broken Social Scene records, and McEntire’s illustrious career comes into sharp focus. In addition, Tortoise has finally started recording again. 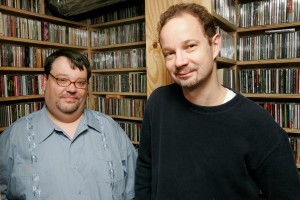 29 Greg Kot and Jim DeRogatis
Hosts, Sound Opinions
Supposedly radio died. If that’s true, then the podcast lives, and WBEZ’s Sound Opinions—which is syndicated to 160 public-radio stations around the country—is the most popular source of music criticism available in the format. Longtime print journalists Greg Kot and Jim DeRogatis have ingeniously revived the double-critic-debate-setup spearheaded by Siskel and Ebert and have won a following beyond mere music fanatics. Their influence cannot be underestimated, especially on the casual listener looking to delve deeper beyond the mainstream. Kot and DeRogatis will heroically exploit their listeners’ good faith for the greater good when the team hosts a live performance from confrontational buzz band Savages, a highlight at this year’s Pitchfork Festival. 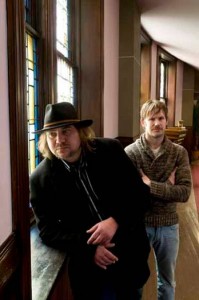 30 Josh Chicoine and Ilko Davidov
Co-Founders, CIMMfest
Josh Chicoine and Ilko Davidov, a musician and a filmmaker respectively, teamed up five years ago to launch the not-for-profit Chicago International Movies & Music Festival, a mix of screenings, discussions and live concerts that celebrate the union of sounds and celluloid. Since then, the festival has grown in scope and stature, with this past April’s version encompassing twenty-two venues, more than a hundred music-centric movies, more than fifty musical acts and about 10,000 attendees over four days. 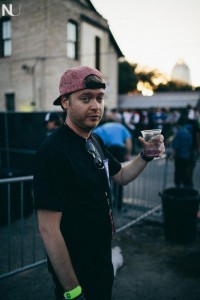 31 Andrew Barber
Founder, Fake Shore Drive
It’s a sign of the times when the most influential gatekeeper in Chicago’s hip-hop scene doesn’t reside in the high tower of a record label, but instead helms the blog responsible for broadcasting the leak of this year’s Lollapalooza lineup. Sure, Kanye West may feature Chief Keef on a track of his new album, or borrow a Young Chop beat for a mixtape, but he’d have never heard of either were it not for Barber’s dedicated hype machine of the city’s most promising upstarts. To boot, Barber was plucked by CNN for consulting on a Chicago documentary airing next year.

32 Robby Glick
Owner, Reggies’ Chicago
Robby Glick’s “Record Breakers” was a store and makeshift venue in Hoffman Estates twenty-five years ago, where free shows were delivered every Sunday to adolescents craving a community outlet. Now the store sits atop both halves of the South Side’s Reggies’—one a twenty-one-plus bar for smaller acts, and the other hosting a larger stage, and capable of all-ages shows, which are a true Chicago rarity. Reggies’ is big enough to break a young, talented act, but also breeds a familiarity that Glick settled into the South Side to find. “Everyone treats Reggies’ like it’s their own,” he says. 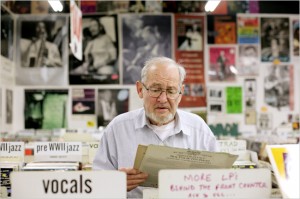 33 Bob Koester
Owner, Jazz Record Mart, Delmark Records
By reputation, Bob Koester belongs to the cantankerous generation of yore. Stubborn men typified by Mike Royko, persecuted visionaries fiercely passionate for a city gone mad, guys for whom retirement is a four-letter word. Koester has earned the privilege of that attitude, as his label Delmark has been running for six decades, funded by the Jazz Record Mart, the oldest record store in the city. Koester belongs on this list not because of his longevity, but because of his continued relevance. Rob Mazurek, Jeff Parker and Jason Adasiewicz all call Delmark home thanks to Koester’s implacable passion for jazz.

34 Brandon Carone, Dino Gardiakos, Ramsey AL-Abed and Salvatore Balsamo
Founders/producers, Wavefront Music Festival
Given the EDM genre’s global connections to fun-in-the-sun spots like Ibiza and Miami, the idea was so obviously great that it makes you wonder why it took so long to do it: a major dance-music festival on one of Chicago’s lakefront beaches. And this year’s festival, thrown over three days during the Fourth of July weekend on Montrose Beach, drew 72,500 fans to dance to the beats of Fatboy Slim, James Murphy, Diplo and many others, as well as plenty of hometown heroes like Derrick Carter, Diz and Frankie Knuckles. Of the four owners, Dino Gardiakos also owns longtime underground dance-music venue SpyBar.

35 Joe Segal and Wayne Segal
Co-owners, Jazz Showcase
It’s a mark of the maturing of Chicago’s music scene that so many clubs are marking twentieth or even thirtieth anniversaries, but none are even close to Jazz Showcase’s sixty-six years in Chicago, making it the second-oldest jazz club in the land, according to Wayne Segal. Wayne’s father, Joe, started the operation in 1947 and still shows up to work in its current location at the South Loop’s Dearborn Station, bringing his experience working with most of the form’s titans, from Dizzy Gillespie, Count Basie and Dexter Gordon to Sun Ra, to new generations of the genre’s fans.