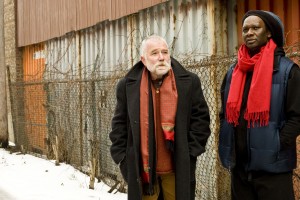 Legendary free-jazz saxophonist Peter Brötzmann makes his triumphant return to headline a trio gig on July 24 at The Hideout. German by birth, Chicagoan by adoption, Brötzmann has spent the last decade collaborating with the best the city has to offer. This show is no exception. Joined by Jason Adasiewicz and Hamid Drake on vibes and drums respectively, it’s not hyperbole to say that if there’s only one jazz concert you brave this year, this is the one it should be.

This visit to America is on top of the five-CD box set “Long Story Short” that Brötzmann released earlier this year. (Did I mention that he’s seventy-two years old?) The set is culled from a four-day string of performances dating back to November 2011 at the Unlimited Festival in Wels, Austria. At the time, Brötzmann assembled some of his finest outfits to celebrate a hard-fought career of ceaseless dedication to pushing the boundaries of creative improvisational music. In Brötzmann’s deft hands, the saxophone screams forth from his stern lips, and the sound is only comparable to the type of distortion Hendrix made popular with the aid of hundreds of volts of electricity. Brötzmann does it with an acoustic instrument. It’s no coincidence that both players wrote signature tunes titled “Machine Gun.” (Kenneth Preski)