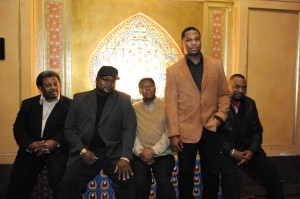 As the best-known proponent of the sacred steel, despite becoming a bit more secular than the church-going set might like, Robert Randolph stamping his name on anything warrants a bit of attention. With or without his blessing, the Slide Brothers would have pursued a music with tendrils slinking back to the 1930s and Pentecostals’ enthusiastic proclamations on its self-titled 2013 disc. Comprising Aubrey Ghent, Calvin Cooke and Chuck and Darick Campbell, the Slide Brothers rave up the most unholy devotional music since blues began. Weaving lap steel in and out of solos and around stuff that opens like a trucker’s dream on “Motherless Children,” the band’s poised to insinuate itself into a Southern rock and blues thing thriving below the Mason-Dixon and at myriad festivals. To most, it’ll all sound like slithering blues with a wild component being contributed by everyone going in on what sounds like Hendrix at church. But what makes the music such a visceral thing is where it comes from. Ghent and the Campbells each count family members who helped found the medium, transmitting everything from religious music gone raunchy to a song praising Franklin D. Roosevelt. But the Slide Brothers’ talent can make just about anything seem as if it’s a preface to a vision quest. Taking Elmore James’ “The Sky is Crying,” the group pushes a secular song to the bridge and dumps over some wailing improvisation tantamount to testifying. Merging religious and secular worlds, though, goes both ways. And on its version of “Wade in the Water,” the whole thing dissolves into a fractured bit of feedback, totally unreligious in nature but able to coax spirit from a stone. There may not be new revelations in this set of tunes. But there’s certainly strength in the traditions it espouses. (Dave Cantor)