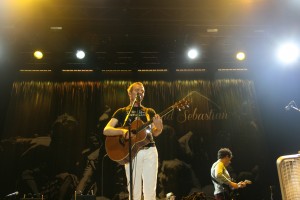 Glancing at this year’s lineup, you could be forgiven for assuming that the annual summer Pitchfork Music Festival seeks to quantifiably organize music as much as its home website’s ten-point rating scale. Each day’s lineup seemed to focus on a particular genre of music: Saturday’s acts skewed toward hard, noisy rock, while Sunday was clearly the day for hip-hop. And while those umbrellas did prove pretty accurate (I watched four rap sets on Sunday, and that’s not even counting TNGHT, the electronic duo whose trap beats are all over recent prominent rap albums like “Yeezus”), they were far from all-encompassing.

Friday, for instance, was ostensibly the day of lighter, indie singer-songwriter vibes, but the first band I saw that day was hardcore punk band Trash Talk. After their second song, lead singer (or “lead screamer,” rather) Lee Spielman asked the crowd, “Who’s excited to see Lil B???” Having expressed his enthusiasm for an eclectic Internet rapper, he dove straight into the mosh pit.

Saturday also offered refutations for the idea that Pitchfork’s acts could be organized into some neat box. A day punctuated with the loudness of Metz, Swans and Savages, among others, was topped off by a headliner choice between EDM producer Rustie and the indie pop stylings of Belle & Sebastian. I ended up choosing the latter, and had the most fun I’ve ever had at a music festival.

All three days of this year’s Pitchfork were characterized by sunny, dehydrating afternoons followed by nighttime rainfalls. Saturday had the biggest intersection between rain time and festival time (I was already halfway home on the El before Friday’s storm really got going) and as more and more drops started falling, I seriously considered leaving Belle & Sebastian’s set after only a few songs. I mean, I’m not super familiar with their deep discography, and they had already played “Piazza, New York Catcher,” so I had gotten what I came for. Slowly but surely, I made my way to the back of the crowd.

And then the frolicking started.

I’m sure many outdoor concerts have been ruined by rain (shout out to the three-hour rain delay at Friday’s Pearl Jam show), but this was not one of them. Maybe it’s that many Belle & Sebastian members are from Scotland, and therefore so used to rain they can totemically draw power from it, but more likely it simply had to do with fans who refused to let either the rain or their position far from the stage get in the way of their festival fun. What started as a small group of friends dancing around to “If You’re Feeling Sinister” quickly progressed until my entire section of the crowd was a gigantic circle of wet-haired, poncho-clad dancers. From there it became a congo line for “The Boy With the Arab Strap,” couples slow dancing to “Judy and the Dream of Horses,” and so on. I couldn’t help but smile the entire time. This is what it felt like to forget about ten-point scales or debates over whether a “Best New Music” designation was deserved, and just viscerally enjoy music. So even though Killer Mike’s Sunday performance was rawer, and Lil B’s manic lovefest was totally unlike anything else happening in music right now, I knew from the moment skipping around in the mud that Belle & Sebastian were my favorite set of this festival, maybe of any festival. It was the kind of set that reminded me why we do all this in the first place.