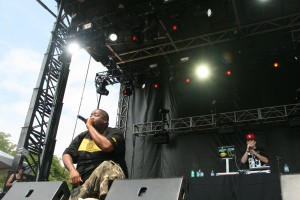 Pitchfork, every year, is one thing: hot. This conversion of much of live music’s capital, from venues to festivals, is somewhat maddening, indeed. I, like the rest of you, have a quite finite sum of money, and have a hard time denying myself the value of seeing several quality acts, in one day, at a severely discounted rate. I am the definition of a simian—I can be manipulated any which way by the shine of a VALUE. I can be led to withstand the body-crunching torment of ninety-three humid degrees in a large park easily a few thousand people beyond its sane capacity, all of them bottle-necking toward the same handful of things. I even like it, too, as this is something like the fifth year in a row that I’ve done this thing. I can’t WAIT to see Killer Mike.

Killer Mike stands at the edge, screaming clever verse in the face of the enemy who hates him too much to even know that he’s alive. His fury is intoxicating on his records, and it translates to the stage at Pitchfork—despite the tremors of discomfort in the crowd when, between songs, Mike tears and blubbers up as he (a former community organizer) pays tribute to those who have helped him rise and, more importantly, to those trying to make America a more habitable place. Mike’s earnestness, and relentlessly political nature, show here why he won’t be headlining at Lollapalooza next summer—he’s too damn real. But his presence is so necessary in the wake of a once-in-a-generation, racially charged verdict the weekend prior; one that had so many of us plug our earbuds in to stand alongside Killer Mike, floating through angry fantasies of facing the entire corrupt system ourselves, standing our ground with a gun in hand, as it invades our home. Preach forever in the Church of R.A.P., Mike.

Guitar, guitar, guitar. Ira Kaplan wields his like it can do everything, and mostly it can. A decent rest of this Yo La Tengo-set review could be a list of synonyms for “noise,” but that’d do injustice to the unspeakably pretty vocal interjections of Ira’s wife Georgia Hubley, and to the lightning bass player James McNew wrote in a bottle when he gave us “Stockholm Syndrome” a decade and a half ago. Kaplan makes a joke about touring with headliner R. Kelly in the nineties, but the fact that Yo La Tengo has actually been around long enough to make one think twice about his seriousness, this strikes the crowd. Pitchfork’s limited means for starry, explosive headliner acts might have resulted in a potentially ironic choice for this year’s installment (Kelly), but that shouldn’t count as much as the consistent excellence throughout every day of every year of a festival which rarely resorts to the biggest names to pull crowds—they’re happy to trust that their devotees are as invested in the ever-shifting sands of culture as they are, and that they’ll catch up with whatever new sounds arise. In Yo La Tengo, Pitchfork couldn’t have found a better bedmate for this paradigm.

Waxahatchee and Toro Y Moi are the nineties and seventies, respectively; plus, us—plus OUR generation’s ability to show our musical forebears how they could have done it better, what new tricks have come around that might color and sharpen the edges of the sounds, so to better take off our own built-up prickles from the intolerable stress of the day-to-day. We can all be dumbasses and undiscerning enough, I’m sure, to give way to so much of the love these main-stages are trying to give us, by day’s end. We can all come back next summer.