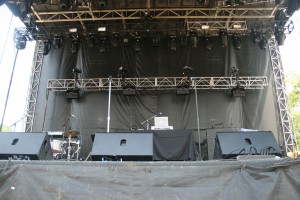 This weekend we went to Pitchfork Music Festival. If you didn’t and want to know how it was, we’ve tried to give you a sense of what transpired through photos and set reviews. But just in case you don’t trust us, and want a 1-10 numerical review of the fest straight from the source, here is how Pitchfork has rated all the acts that played Pitchfork Music Festival this year.

We went through all the festival acts, found every review Pitchfork had ever given them and averaged it out to give each artist a rating. We then used those averages to give each day of the festival a 1-10 rating. All those statistics are below. Before that, here are some interesting superlatives:

When I was first running through this calculation, I made a mistake and thought that Savages had ended up with the highest score, since they had only received an 8.7 for their debut album, “Silence Yourself.” I thought that made perfect sense, because even though it would mean a new band appeared to be getting a better rating than Bjork or The Breeders (whose best albums have never been reviewed by Pitchfork and therefore don’t count in this calculation), many festivalgoers and reviewers (Sound Opinions host and Music 45 member Jim DeRogatis among them) considered Savages’ Saturday set a highlight of the festival.

But no, it’s Joanna Newsom. She is, of course, very good at what she does, and therefore beloved by critics. But as my informal poll of crowd reaction to her Friday set made clear, “what she does” (play a gigantic harp, sing a strange brand of folk music, among other things) is not necessarily beloved by everyone. Her music can sound on record, but it’s not as presentable to a headlining slot at an outdoor summer festival.

Like Savages, Blood Orange has only had one album reviewed by Pitchfork: 2011’s “Coastal Grooves.” But since that album’s low score had nothing to bring it up the way M.I.A. has the immortal “Kala” to balance out the maligned “Maya,” Blood Orange was stuck with the lowest average score out of all the weekend’s acts. Dev Hynes is undoubtedly a talented musician (the R&B-tinged music of Blood Orange is his third act, after playing in dance punk band Test Icicles and performing folk music as Lightspeed Champion) but this score backs up what should already have been clear to everyone: Killer Mike’s stage was the place to be at 3pm on Sunday.

Here is the day-by-day breakdown. Each artist has their most recent rating from Pitchfork as well as the average of all the ratings they’ve ever received. 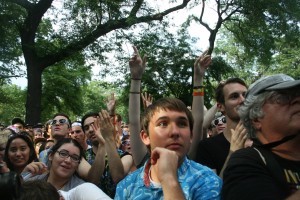