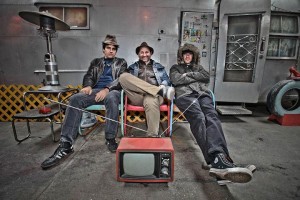 There’s not so much punk bearing down on Greg Cartwright’s Reigning Sound project. Since its inception in the early aughties, the band’s work has taken a decidedly lower-key feel than his earlier ensemble, the Oblivians. And while that Memphis institution has recently issued a new disc retaining its grimy feel, the songwriter and guitarist seems to have been able to cordon off his more rambunctious leanings. First issuing “Break Up, Break Down” back in 2001, Reigning Sound has focused on mining garage and R&B from a pre-punk era, inserting enough of a classic-rock approach to jamming to make the whole thing sound modestly modern. Having the opportunity to write, record and tour with the Shangri-Las’ Mary Weiss a few years back punched up the ensemble’s credentials for folks outside the subterranean rock scene, enabling Cartwright and company to insinuate itself into Scion’s burgeoning infatuation with garage stuffs. Why the car company figures propping up scuzzy rock bands benefits its line of boxy wagons and sleek-looking cars is anyone’s guess—the collector-scum set can’t be known for purchasing new cars. “Abdication … For Your Love” came out in 2011 and wasn’t accompanied by a set of keys or a short-term lease. It does count a short set of well-wrought tunes on which Cartwright sounds like the veteran he is, composing tracks like “Call Me #1,” sporting a surprisingly unique and thoughtful slinky guitar line along with his restrained vocals. The variation promised by Reigning Sound’s first album—and exemplified on tracks like “As Long,” featuring some lap steel and mandolin—hasn’t been fully realized. But the weight of Cartwright’s songcraft and increasingly confident crooning makes the ensemble an important part of Memphis’ 1990s garage legacy. (Dave Cantor)