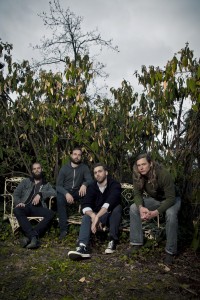 There’ve gotta be as many detractors of Savannah’s Baroness as there are adoring fans. The metal-cum-proggy band’s undertaken such a dramatic shift in focus, there’s no way it holds the attention of a unified fan base, let alone draw and maintain new listeners. But Baroness’ penchant for incorporating a grocery list of musical influences is what makes it an intriguing act to follow, despite the almost pervasive shortcomings of its latest album, 2012’s “Yellow & Green.” Opening with a morose, slowly-paced guitar track makes an affiliation with metal a difficult relation to fathom. It’s still there, though. The introductory effort readies listeners for the few short interspersed tracks littering the double-disc—all of it sounding like music conceived by dudes at their parents’ homes during the late 1990s and executed a bit later. It is. What it all comes down to, even while considering the band’s sonic growth and advancing songcraft, is that the endeavor could be a new wave band doing nineties Metallica covers. Sure, digging through the seventy-five-minutes-worth of music reveals a few choice moments—moreso on the “Yellow” half than on “Green.” But Baroness seems to have devolved into a ballsy (and cheesy) hard-rock act. The band’s development puts on display all the vagaries of experimentation. Kudos to them for having a heart and a dream, but it doesn’t work out. So, folks who’ve lost track of the band, keeping it suspended in the pre-“Red” era, are advised to maintain a good distance. With all the obvious talent, though, it would be surprising if future adventures from Baroness weren’t able to at least occasionally capture some of the early metal-drudgery and fury of its EPs. (Dave Cantor)