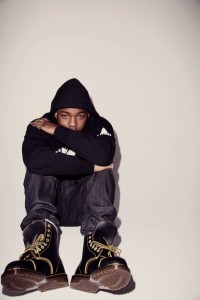 It’s truly a mystery why folks have lost their minds over Kendrick Lamar’s “good kid, m.A.A.d city.” Certainly, the album slots into a current trend of digitally birthed MCs making moves on the charts. But on its own, the songs don’t display much to celebrate. Surprisingly, even contributions from Dr. Dre don’t do much to lift the album above mediocrity. Paying homage to Tupac with the inclusion of a track called “Poetic Justice” encapsulates the album’s shortcomings and its shortsightedness. The Janet Jackson vocal sample so overshadows the track’s music that Lamar’s rapping falls away, sounding like easily ignored fluttering syllables. More than anything else, though, Lamar’s decision to use music begging him to rap ahead of the beat—“m.A.A.d city” as exemplar—dooms the disc to sounding like just about any other genre album from the last few years. Issuing work since 2003—initially under the name K-Dot—Lamar’s released as many projects as some veterans do in an entire career. And while his latest album likely will form the basis for his future career, it’s “Section.80” that best displays the MC’s abilities. “A.D.H.D.” might deal with pedestrian topics, but Lamar’s ability to ride a reasonably abstract beat—something he does even more admirably on “Blow My High (Members Only)”—makes the effort one worth revisiting. Also, hearing Lamar say “Eight doobies to the face” more than a few times doesn’t make for boring listening. There’s an affected pronunciation cropping up, but it just makes the combination of music and Lamar’s flow that much more enticing. The move to a higher-profile cohort hasn’t ruined the MC, but it has provided for an average major-label debut. It shouldn’t, however, impact Lamar’s performance on the mic. (Dave Cantor)