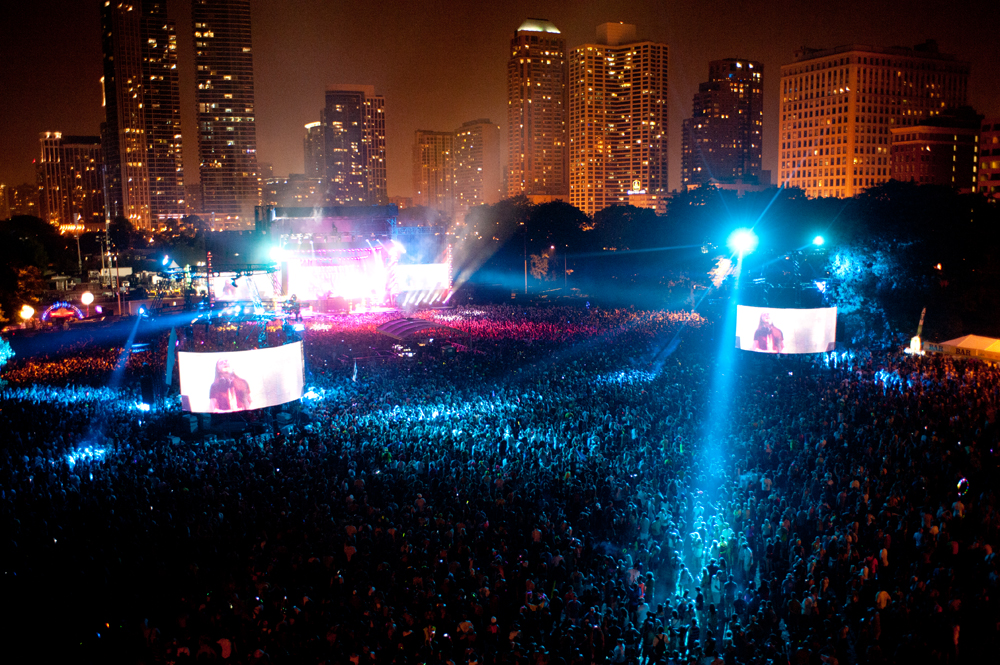 We asked two “veterans” of the Lolla experience to share their secrets.

Make no mistake: Even if you’re a festival pro, Lollapalooza can be a challenge. It takes place on what is usually one of the hottest weekends of the year in Chicago, and the massive size of the festival’s audience and lineup can easily overwhelm. But with a little preparation, it’s not hard to avoid the usual Lolla headaches—aching feet, dehydration, sunburn—and maybe even end the fest feeling as relaxed and daisy-fresh as Day One.  (OK, I won’t guarantee that.) Here are a few survival tips:

Plan your schedule realistically
Unless you have some kind of Star Trekesque transportation device you are NOT going to make it from one end of Grant Park to the other in less than five minutes, so don’t create a schedule that requires you to go back and forth from the Bud Light stage and the Red Bull stage all day long. If you are dead-set on getting a good spot for The Postal Service at 8:30pm, you may have to miss out on much of The Lumineers set that ends at 8:15pm. As you plan your schedule, take time to factor in stage location and remember that you’ll be sharing space with about 269,999 other dehydrated people, and they won’t be walking briskly. Also note that aftershows are a great way to check out bands you may miss during the fest.

Leave a little time to explore
Don’t pack your schedule so tightly that you don’t have time to discover new bands to love—that’s one of the best parts about any music festival. If you’ve got some down time between must-see acts, take a little time to follow your ears (and your heart) and check out a new artist without consulting the schedule. I recommend the Perry’s DJ stage, which is consistently one of the most dynamic and fun spots of the entire festival. Don’t overlook the non-music elements of the festival as well, the eco-friendly Green Street tent, and of course the great local food vendors.

Buy (or borrow) a small backpack and fill it with the following items:
A water-container/bottle: No, not an Aquafina bottle, but a sturdy container that you can refill at a water fountain. Stay hydrated. Beer does not count. And if you do drink beer, stick with wheat beers.

Sunscreen: Probably SPF 30 or higher will do, just don’t forget it.

Sunglasses: Especially if you are a person of the squinty variety, like myself, this will be a lifesaver.

A poncho: Just in case but way sexier than walking around looking like a drowned rat in case there is a downpour.

Don’t get too dependent on technology for scheduling
If you’re planning to make on-site plans to meet with friends via your smartphone, you may be disappointed. Depending on your carrier, you may have little to no reception once you are on festival grounds, so make firm plans with friends beforehand so that you’re not playing a frustrating game of “can you hear me now?” when you should be enjoying the show. Also, be sure to grab a paper schedule just in case your phone craps out on you and you can’t use the Lolla app.

Wear comfortable shoes
I am all about looking stylish at festival shows, but remember that you’ll be out and about for at least eight-to-ten hours for three days. Such an environment will take a physical toll, even if you’re in good shape and healthy. So nix the flip-flops (seriously, nix the flip-flops) and wear some shoes with some support and some air and you will be guaranteed to enjoy yourself a lot more throughout the weekend. 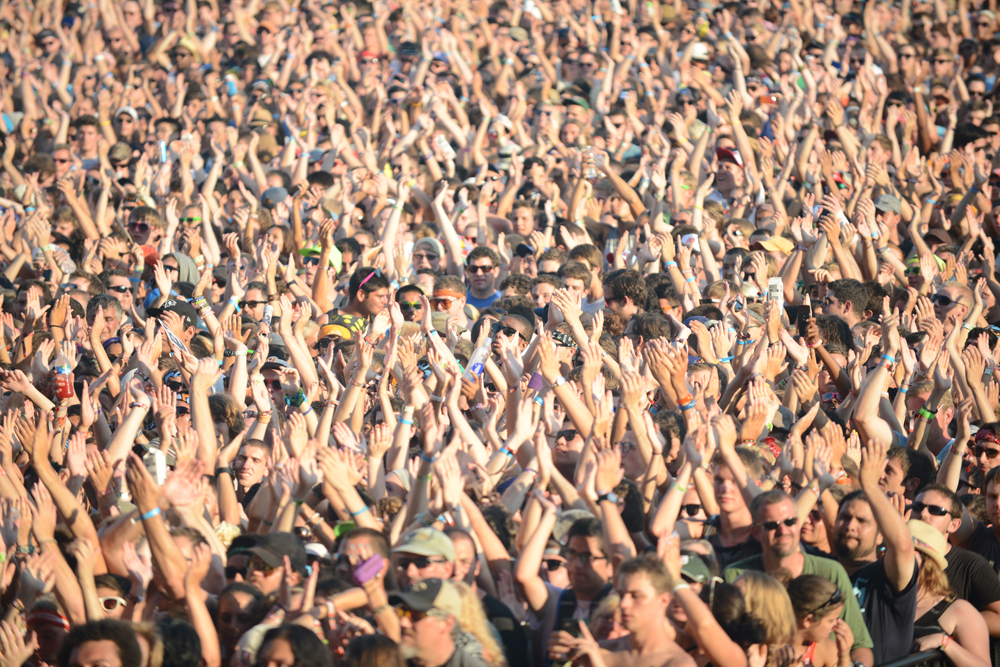 Lollapalooza gets bigger every year. This was made painfully clear a few months ago when this year’s tickets (from VIP passes down to single days) sold out in barely an hour. That means, of course, that every year there are plenty of people going to Lolla for the first time. I’m here to offer help for those folks. Lolla veterans who remember Daft Punk’s legendary 2007 headlining set or the days when Perry Ferrell actually played in Jane’s Addiction may scoff at my mere two years of experience going to the festival, but even in that relatively short time I’ve acquired some pro tips that might help Lolla newcomers drastically improve their first experience with the festival.

Pick a meeting spot
At Lolla, you get to experience a lot of awesome things. Cell phone reception is not one of them. There’s just no way for any single smartphone to break through the masses and send messages with any consistency. Unfortunately, most people attend Lolla in a group, and even friends might disagree about whether to see Band of Horses or Crystal Castles on Friday. Last year, my friends and I came up with a solution that ended up working extraordinarily well. At the beginning of the fest, we decided on a meeting spot. Then, when we would temporarily go our separate ways because of disagreements about the quality of Chief Keef’s music, we would easily be able to regroup without waiting frantically for a text to go through or (God forbid) looking for each other in the massive throng.

Bring a Camelbak
Paying for a Camelbak (i.e. a backpack that doubles as a water supply) may seem like an investment you don’t need after already shelling out God-knows-how-much for tickets on Craigslist, but trust me, you will get your money’s worth after a single day. Unlike Bonnaroo or Coachella, Lolla is beautifully situated on a lake rather than stuck in the middle of the desert, but it can still get hot and sweaty. Having easily accessible water is indispensable, and the festival is filled with refilling stations.

Don’t bring anything you aren’t prepared to lose
If you’re one of those people who thinks that Lolla is the perfect time to show off your fashion sense or amazing retro NBA jersey, let me remind you that both Lollas I’ve been to have experienced significant amounts of rain. Because of that, you should prepare for damage. “Everything  you have, including your psyche gets ruined,” says my friend Joel Swanson, who’s been going to Lolla even longer than I have. “So have a charged and waterproof phone for all three days. Clothing is almost guaranteed to be wrecked, so wear something you’re okay with never seeing again. Something you can burn. The best way to get through a crowd is by covering yourself with mud. It’s really you against nature.”

Don’t go over the top
Many people I know see Lolla as the year’s ultimate party, a chance to spend an entire weekend getting ridiculously drunk and partying at the EDM-focused Perry’s stage with old high-school friends. And that’s a totally fine way to approach the festival. But I’ve run into one too many people stumbling through Grant Park with glazed eyes, and I can’t help but think, what a waste. You can get drunk anywhere, but the same can’t be said for watching The Killers perform (especially since Lolla’s rules basically stop their acts from playing in Chicago the rest of the year). If you’re there for the music, getting blackout is stupid. If you’re not there for the music, then I must say I have no idea why you’re shelling out almost $300 for a music festival.

Make an exit plan
It’s a tough trade-off: do you stay long enough to finally see Jack White perform “Seven Nation Army” in person? Or do you duck out a little early to beat the rush? My advice differs depending on who you are and what you want. I think you should try to beat the rush if you need to make a train (since train schedules differ on the weekend, the train you need to get on might be leaving less than a half hour after Lolla ends). But if you live in the city or really care about the headliner, stay as long as you need to. After all, what’s the point of seeing a Postal Service reunion show if you don’t stay for “Such Great Heights” Whatever it is, you should have an exit plan.