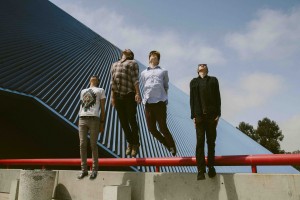 I used to live in New Orleans and when I moved back to the Midwest the one thing I missed most from that magical place was the way that city breathed and bled music. Except for a diehard loyalty to the city’s nonpareil brass band and Dixieland sound, the Big Easy embraced every genre that came its way with only one condition: if you’re playing in New Orleans, it doesn’t matter who you are or what you’re playing, the audience runs the show. The shows I saw down there permanently changed the way I watch any band live. If for one moment I feel that the audience isn’t the reason the music is being played, I have to try really hard not to call the experience a bust. For my Lolla schedule, I picked bands that I believe follow or at least have a summary understanding and decent level of respect for the New Orleans rule of thumb. You’ll find my Dixieland sentiments more than obvious with the number of folk-rock acts I chose, but for the most part, the bands I’m electing to see are those who I trust will give their crowds the chalice and make Lolla our Lolla.

Noon-12:45pm
The Neighbourhood
Petrillo
It’s summer and they won’t be wearing that winter clothing article that put them on the map but they are still warm from the release of their EP almost a year later. Everyone in the crowd is going to have a blissful moment of 2012 solidarity when “Sweater Weather” fills those speakers.

1:30pm-2:15pm
Deap Vally
Petrillo
If Heart could’ve had sex with The Black Keys in a garage, on a Fender amp, next to a 1970 AMC Gremlin, they would’ve created the duo of Lindsey Troy (guitar/vocals) and Julie Edwards (drums).

2:15pm-3:15pm
Ghost B.C.
Bud Light
The mystery behind this alchemical group surpasses that of the Catholic Church doctrine as they’ve managed to keep their identities undisclosed to the public and known only as the Nameless Ghouls, this Swedish costumed act has an onstage presence and conjured neo-Black Sabbath sound that will haunt the shit out of you.

4:15pm-5:15pm
Band of Horses
Bud Light
The depth of lead singer Ben Bridwell’s voice makes up for the persistent uniformity of their Seattle-Gone-Southern sound from song to song but expect this act to be well attended as their live performances do a moving of their own: the crowd.

5:40pm-6:20pm
Hey Marseilles
BMI
Another pure folk-rock sound from Seattle that is able to go from the strums of a single, nylon string guitar to a waterfall of full-bodied acoustics, chirpy fiddling and hand claps. Expect to participate in the latter during “Rio.”

7:25pm-8:25pm
Hot Chip
Lake Shore
This referral breaks significantly away from my preferred whiskey-soaked crooner genre but frontman Alexis Taylor has what seems like a supernatural ability to not breathe as he sings through addictive dance-pop beats.

8:45pm-9:45pm
Lana Del Rey
The Grove
Yes, I’m seeing her without hesitation. Doesn’t matter what smirk-worthy reputation her debut performance on SNL supposedly generated. Doesn’t matter that she referred to herself as a “self-styled gangsta Nancy Sinatra” nor does it matter that her debut album garnered dismal reviews from critics like Chicago Tribune’s Greg Kot, who described her freshman effort as “ho-hum.” Rey found a right-under-your-nose pitch that melts bone and her critics unanimously voted that it came from some otherworldly wormhole not right for this world. That bandwagon judgment should have been immediately vetoed. It’d be bullheaded not to agree that a new artist who attracts such an overweight portion of negative press isn’t receiving that kind of attention without the potential that maybe she’s damn good. Well, she is. Music’s pretentious talking heads couldn’t figure the simple science behind why, so the slander hyenas were let loose. Don’t let those stop you.

12:45pm-1:30pm
Shovels & Rope
Red Bull Sound Select
As if it was sung through tin cans and string straight to you.This Charleston, South Carolina husband-wife duo are bringing the alt-country back to Chicago and the simplicity of their act will make for a relaxing post-lunch calm in the middle of your afternoon.

2:10pm-2:50pm
Wild Cub
BMI
What makes this indie foursome unique is their ability to make a moody slow unexpectedly fast and catchy. Nashville’s Wild Cub will be one of those bands you’ve heard mentioned but never really paid much attention to until you experienced the high-caliber craftsmanship of their sound at Lolla. They’ll be turning heads and you’ll want your head turned.

3:45pm-4:45pm
Matt & Kim
Petrillo
They’ve won enough awards for the DIY inventiveness of their loft party pop for someone to correctly assume that this will be a well-attended act. Matt Johnson and Kim Schifino’s off-stage chemistry translates to an on-stage energy that is especially fun, not to mention endearing, in the flesh.

4:30pm-5:30pm
Baauer
Perry’s
When we hear “Con los terroristas” and then that electronic zipper consistently jamming, we’ll know what to do.

6pm-7:15pm
The National
Red Bull Sound Select
I’ve been in South Side Chicago bars that scoff at most everything outside of hip-hop, but whenever Matt Berninger’s baritone lyricism fills the room, everyone shuts up and listens. The National has fallen victim to haphazard Joy Division comparisons like any band that captures the sound of chillingly honest solemnness. I don’t know what sad goddess Berninger is trying to swoon in the thick layers of his tracks, but she must hold some secret to the universe that we desperately need to know because he’s pouring his mind, soul and body into that mic. As the sun finally becomes exhausted and the heat gives way to evening, this is the Saturday show to see.

7:15pm-8:15pm
The Lumineers
Lake Shore
I honestly can’t name another song of theirs besides “Ho Hey” but I really don’t care. This 2012 folk-rock startup came out of nowhere with mandolin-powered force and now is your chance to see them because their future looks promisingly bright.

8:15pm-10pm
Mumford & Sons
Red Bull Sound Select
Most will be choosing between Postal Service and Mumford & Sons right up until 8:15pm Saturday night, but I’ll be at Mumford & Sons. They say they’re going to release a new album and follow through with it.

Noon-12:45pm
Guards
Lake Shore
Critics have put the Guards to so many late-nineties rock comparisons that the validity of the analysis has become lost and in need of being ditched altogether. Their upfront reverb, compounded vocals and poppy melodies are signature keystones of indie rock’s last couple years and their festival-friendly, palm-muted guitars belong right here with us in 2013.

1pm-1:45pm
Palma Violets
Bud Light
These lads are going to be fun. Their sound is longitude if the Arctic Monkeys’ was latitude: same map, different directions.

1:45pm-2:30pm
Jake Bugg
Petrillo
If I was a bootlegger who got into a high-speed Ford Model T chase with the cops, I would want this nineteen-year-old’s single “Lightning Bolt” to be playing when I hit a top speed of forty-five mph and swerved down a dirt path to get away.

3:30pm-4:30pm
Baroness
Petrillo
I have a soft spot for metal but it’s extremely sensitive and that makes me picky when it comes to loyalty to a band. Metal is the one genre in which my taste needs high-quality musicianship and technique to be satisfied. Baroness not only made the cut but set a new bar for me and I’m looking forward to this kind of appreciation their set will demand.

5pm-6pm
Alt-J
Lake Shore
My favorite new band of 2012. If you haven’t heard of them, check out their work on YouTube. The artistry of their music videos is as enticing as the hook of their rhythms. I saw them perform at Metro back in March and it was one of the best shows I’ve ever seen. Why? Because every person in that crowd knew every single word to each song and I felt like I was a part of something larger than me, something ineffable being exchanged back and forth from performers to audience and vice versa in the spirit of music that cold spring night. Not a single track on their self-titled, debut album ceases to amaze me after listening to it over and over for nearly ten months now. Sunday belongs to Alt-J.

6:30pm-7:45pm
Vampire Weekend
Bud Light
Damn courageous music. And consistently courageous. When everyone went to hate on their whippy, colloquial lyrics and frolicking, Paul Simon Graceland-esque cadence, they stood their ground and then carried on with their nuanced ditties to keep their original indie sound.

8:45pm-9:45pm
Cat Power
The Grove
There’s an in-your-face beauty Charlyn Marie Marshall conjures that cannot be ignored. When the sun sets on Lollapalooza 2013, Marshall’s voice is the last thing you’ll want to hear as you and your memories walk away.