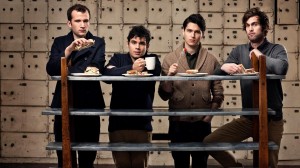 Like anyone else who came of age after the Internet created near-limitless access to music of all shapes and forms, I enjoy music of many different genres. But though I enjoy acoustic guitar-based folk bands and the occasional eloquent rapper, at the end of the day, I still get my biggest kick out of indie rock and its discontents. That’s why, with a few exceptions, my Lolla consists mostly of contemporary rock bands.

1:45pm-2:30pm
Icona Pop
Lake Shore
Unfortunately still no full-length from the duo behind “I Love It,” but the “Iconic” EP is full of power-pop jams that will help you start your Lolla off right.

4:15pm-5:15pm
Band of Horses
Bud Light
Although their last few albums have been fairly nondescript, nothing will ever make me renounce the greatness of those first two. Those songs are able to vacillate between my two favorite festival modes: pleasingly relaxed (“The Funeral”) and energized (“Is There a Ghost”).

6pm-6:45pm
Disclosure
The Grove
Even for an EDM newb like me, it’s almost impossible to resist the magic of Disclosure’s music, which is soulful, danceable and (most importantly) doesn’t feel the need to indulge in the dubstep drops that have become so big they’ve become a parody of themselves.

6:50pm-7:30pm
Chance the Rapper
BMI
Once again, not a spectacular showing for hip-hop in this year’s Lolla schedule. Not much of a surprise: most rap is more conducive to an intimate setting than a wide-open outdoor space. Despite all this, I’m making room for Chicago’s own Chance the Rapper. His breakthrough mixtape from earlier this year, goofy charisma combined with the soulful beats of his mixtape “Acid Rap” should make for a great festival performance.

8:25pm-10pm
The Killers
Red Bull Sound Select
For my taste, Friday has the weakest group of headliners, but at least Brandon Flowers and Co. can help me reconnect with my middle-school self.

2:15pm-3pm
Ben Howard
Red Bull Sound Select
There will be plenty of time for Mumford’s brand of energetic folk music later in the day, so start things off with a more mellow singer-songwriter, whose 2012 “Every Kingdom” is full of acoustic jams.

3:30pm-4:15pm
HAIM
The Grove
They don’t have a lot of material out yet, but this band of three sisters shows a lot of promise. “Falling” is as addictive as rock songs get these days.

6pm-7:15pm
The National
Red Bull Sound Select
Ok, so I haven’t exactly been head-over-heels about The National’s last two albums, but it’s a matter of small embarrassment for me that I have yet to see “Mr. November” performed live, complete with the frantic stage antics singer Matt Berninger is known for.

7:15pm-8:15pm
Death Grips
The Grove
At first, Death Grips may seem like an older Odd Future, all shirtless scream-“rapping” and blasting noise, but they have plenty of rock cred in the form of their drummer, Zach Hill, previously of math-rock band Hella, among other things. His rapid-fire drumming makes this a live act much more energetic than the soft, if heartfelt, Lumineers.

8:15pm-10pm
Mumford and Sons
Red Bull Sound Select
One of the things that helped build Mumford’s buzz a few years ago was a balls-to-the-wall set at Lolla, so it’s hard to resist watching them come full circle like so many other Lolla headliners before them. I know they’re not exactly the “cool” choice (or even the “indie rock” choice), but what they lack in lyrical creativity they make up for with contagious energy. This is the great thing about Lolla: I can spend the daytime hours catching my favorite breakthrough acts and then, come nighttime, sing along to popular anthems with thousands of other people.

2:30pm-3:30pm
Wild Nothing
Red Bull Sound Select
Feel free to take your time getting to the fest on Sunday. You’ve earned it after two days of nonstop music. A relaxing indie-pop set by Wild Nothing will help ease you back into this year’s final (and for my money, the best) day.

3:20pm-4pm
The Mowgli’s
BMI
Even an affirmed Chicagoan can get a kick out of “San Francisco,” this band’s ode to love, drugs and craziness in that great coastal city. The rest of the songs on debut album “Waiting for the Dawn” carry the same fun, energetic vibes.

4pm-5pm
Tegan and Sara
Red Bull Sound Select
This is the kind of band that inspires super-fans. I am not one of them, but their indie pop is good enough to give their live act a shot (especially since they’re in a weird time slot that’s not really competing against anyone).

5pm-6pm
Alt-J
Lake Shore
A daytime festival set doesn’t leave much room for the light show that forced Metro to post epilepsy warnings at this band’s March show, but their songs, which strike the perfect balance between complex and accessible, will still make for a great live performance.

6:30pm-7:45pm
Vampire Weekend
Bud Light
Vampire Weekend is my favorite band. There, I said it. I know people think they’re soft or whatever, but “A-Punk” was the first modern rock song I discovered myself, and helped me come into my own music taste instead of just borrowing my dad’s CDs. Like the “Toy Story” franchise, it’s almost like they grew up with me. I was a silly high-school freshman when their goofy-song-filled debut dropped in 2007 and later a pretentious senior ready for the over-the-top complexity of “Contra.” Now, I’m a maturing college student in love with the wiser and more spiritual “Modern Vampires of the City.” For my money, it’s the best album of the year so far. I wouldn’t miss this set for the world.

8:30pm-10pm
Phoenix
Bud Light
I leave for France at the end of August, so no better way to prepare than by ending Lolla with a set by one of the best French rock bands of all time, right? Between that and the fact that “Lisztomania” still rocks, there’s no other choice for me.