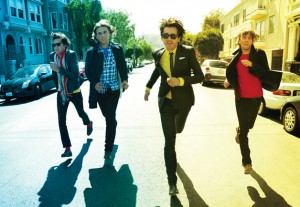 I’m supposed to complain about how corporate-driven Lollapalooza is. I’m supposed to hate it and love Riot Fest. I shouldn’t have as much fun as I do every year, but whatever, I do have fun and honestly that’s all that really matters at Lollapalooza. Seriously, that’s it. So here’s the schedule that I think would yield the highest fun return.

12:45pm
IO Echo
Bud Light
I caught this band at SXSW, but only a song. I think they deserve my attention for a full set this time around.

1:45pm
Icona Pop
Lake Shore
Don’t you want to see everybody go crazy for “I Love It”? I sure do.

3:15pm
Jessie Ware
Petrillo
If anything will class up this fest, it’s Jessie Ware.

4:30pm
Pacific Air
BMI
This is my buzz band of the fest. They seem to have the pop sensibility of Coldplay without sounding like a rip-off. Throw in some whistling and synth swells, it’s some of the catchier stuff at the fest all weekend.

6:15pm
New Order
Red Bull Sound Select
Does this count as a nostalgia trip? Whatever, I’ll dance around to “Bizarre Love Triangle,” I don’t care.

7:25pm
Hot Chip
Lake Shore
Just coming from New Order, the dancing shoes will be worn in and this should be the indie dance party of the weekend.

1pm
Pujol
The Grove
My rule: always start the day with something electronic.

2:45pm
Charles Bradley
Bud Light
There are only a couple chances to get my funk on at Lolla this year, so Charles Bradley is can’t-miss.

3:30pm
Haim
The Grove
These girls toured with Vampire Weekend already, and hit the road with Phoenix next. I’m eager to see what all the hype is about.

4:45pm
Ellie Goulding
Bud Light
One of the few pop stars at Lolla I feel comfortable showing my face at, because “Anything Could Happen.”

6pm
The National
Red Bull Sound Select
I know exactly what I’m going to get at a National show, so I’ll go get it.

8:30pm
The Postal Service
Bud Light
A nostalgia trip is inevitable at Lollapalooza, might as well take this one, right?

1pm
The Orwells
The Grove
One of the many young rock bands in Chicago who love distorted guitars. They’ll have fun.

2:15pm
Wild Nothing
Red Bull Sound Select
One of my favorite singles of 2013 is “A Dancing Shell,” which gives me reason enough to check out Wild Nothing’s set.

3:30pm
MS MR
The Grove
A band I’m skeptical of, but will form my final opinion on after I see them live.

6pm
DIIV
The Grove
DIIV played my favorite show at SXSW, but have since been acting curmudgeonly. I’ll be at this one just to see if there’s an on-stage meltdown.

8:30pm
Phoenix
Bud Light
Easily my most anticipated show of the fest. I’m giddy like a kid on Christmas Eve just thinking about bringing a sweaty, disgusting, dirty Lollapalooza weekend to a climax with a nighttime set outside in Chicago with one of the best bands in the world. They can play anything they want, new songs or old, and I’ll be singing along to every one of them. But I sure hope they end with “Long Distance Call.”