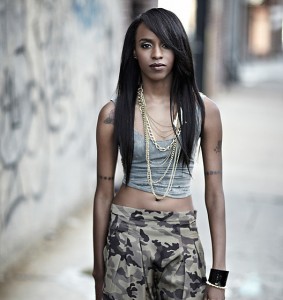 I am a thirty-year-old lover of many musical genres. I was raised on a hot stew of Pink Floyd, Michael Jackson, The Eagles, Aretha Franklin and Annie Lennox. I spent my teens ambling back and forth between alternative rock and a love-hate relationship with rap, boycotting but eventually coming to terms with homophobic lyrics; as well as the occasional purchase of a Basement Jaxx or Goldie EP. Today, I tend to look back rather than forward. I frequent soul parties and fend for rare disco-funk twelve-inches, but I always stay on point with hip-hop. There are so many bands and genres from decades past to get lost in I often neglect newcomers. I’m not some progressive indie-band genius but my friends are. Thanks to them I’ve added more to my list of all-time favorites like Death From Above 1979 or the Mars Volta. I’m looking forward to more “introductions” via this Lolla.

Noon-12:30p
Drowners
The Grove
One of those bands whose look and sound reeks of “move to Brooklyn to start a band, meet babes, and hang out on rooftops,” but it actually comes off as genuine and romantic.

2:10pm-2:50pm
Brick + Mortar
BMI
This band delivers an impression of The White Stripes on a cocktail of uppers, steroids, and hallucinogens, attributing to their mix snare-drum-pacing and electronically formulated riffs.

3:15pm-4:15pm
Jessie Ware
Petrillo
A must-see. A friend of mine put me on to her before the US release of her first album, “Devotion,” last summer. I was instantly enamored with the sound of her mournful voice. At twenty-eight years old, she writes all her songs while trusting fellow Londoners, producers SBTRKT and Joker, to handle the rest—akin to the working relationship between David Stewart and Annie Lennox. Maybe that’s why her music sounds to me like a renewed Eurythmics.

4:15pm-5:15pm
Crystal Castles
Red Bull Sound Select
I have a feeling this is where it starts getting rowdy. Time to dance like no one’s watching.

5:45pm-6:45pm
Modestep
Perry’s
Though very much dubstep, Modestep’s tracks are infused with lyrical “loops” evocative of vocal samples from early house EPs. If anything, I predict good people-watching.

6:15pm-7:30pm
New Order
Red Bull Sound Select
No way am I missing the band that rose from the ashes of Joy Division.

7:25pm-8:25pm
Hot Chip
Lake Shore
When in doubt, trust your friends. Not to mention, they would smack me if I didn’t go to Hot Chip.

2pm-2:45pm
Reignwolf
Petrillo
Reignwolf is said to put on quite the theatrical performance.

4:30pm-5:30pm
Baauer
Perry’s
Baauer made pop-culture relevance with his “Harlem Shake” track. I’d like to see if he has anything else to offer.

6:45pm-7:45pm
Kendrick Lamar
Bud Light
Kendrick Lamar’s album on Dr. Dre’s Aftermath label “good kid, m.A.A.d. city” is a blessing to rap fans everywhere yearning for something so bangin’, so harmoniously good from start to finish that, from the moment of purchase no other music exists. His style is that of a genuine storyteller who brings you right into his feelings and memories, and doesn’t solicit for recognition by namedropping designers or hypothetical millions. If you listen, you will learn about growing up in Compton and the struggle to balance choice and consequence.

8:45pm-9:45pm
Azealia Banks
The Grove
She’s a musical tastemaker and oh so adorable.

2pm-3pm
Angel Haze
Perry’s
Raykeea Wilson, aka Angel Haze, is slated to be rap’s new bad-ass. Her career started unassumingly on Tumblr, posting videos of herself rapping verses she’d adapted from poems. As her followers grew her video clips evolved into mixtapes, EPs and ultimately a record deal and anticipated full-length album, “Dirty Gold.” Only twenty-one, Raykeea has had less time to become familiar with rap and mainstream music due to her upbringing under the Greater Apostolic Faith whose strict religious principles isolated her. Now she can’t hold back. Her rhymes are tough, fast and shameless, reflecting on everything from pan-sexuality to the abuse she suffered as a young girl. She is eager to show her true self to the world.

3pm-4pm
Lianne La Havas
Lake Shore
Because I can’t walk away from clarified butter. Her voice is amazing.

4pm-5pm
Tegan and Sara
Red Bull Sound Select
I feel like I’ve been missing out on this band over the years.

6:30pm-7:45pm
Vampire Weekend
Bud Light
Another band I’ve heard a lot of buzz about over the years, yet have never taken the time to listen.

7:15pm-8:15pm
2 Chainz
The Grove
A must-see. Trashy as it is, trap music is damn entertaining. The man rhymes “Versace” with, “Cheese on my broccoli.” Need I say more?

8pm-10pm
The Cure
Red Bull Sound Select
If they could just play “The Head on the Door” from start to finish I’d be ready to die.