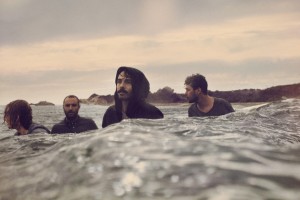 I’ve always been drawn to music lyrically based along the realms of Iron & Wine, Lord Huron or my recent obsession with Lorde, yet somehow my friends convinced me to spend my first Lolla experience entirely under the Perry’s tent. Weirdly enough, among the lights and pounding bass that made my ears ring all along the train ride home, I had the time of my life. Although I don’t recommend anyone follow my footsteps and spend their entire Lolla experience at Perry’s, (and miss Ellie Goulding, Alt-J and Local Natives? No thanks.) I do believe an open mind is the key to getting the most out of Lolla. Acts range from alternative, folk, to EDM, so why not get a taste of it all?

Noon-12:45pm
The Neighbourhood
Petrillo
Not quite indie rock, yet not full-on R&B, The Neighbourhood wavers between the two creating dark, melodic tracks worth checking out, like “Sweater Weather.”

1:45pm-2:30pm
Icona Pop
Lake Shore
Happy, dancey electric pop songs because when you’re at Lolla there really are no worries in the world, right?

2:15pm-3pm
Twenty One Pilots
The Grove
I cannot get “Holding On To You” out of my head—it’s like white-boy-rap meets alternative in a calmer version of Linkin Park—but in a way that I’m okay with.

3:30pm-4:15pm
Atlas Genius
The Grove
Atlas Genius is Foster the People meets MGMT while giving off a cool, melodic vibe only the Aussies could pull off.

4:15pm-5:15pm
Band of Horses
Bud Light
These guys scream Northwest indie rock, if by scream I mean sing in a whiny, echoing tone that they somehow make so appealing. Check out “Our Swords.”

5:15pm-6:15pm
Imagine Dragons
Lake Shore
I almost wrote these guys off as a one-hit-wonder with “It’s Time,” but now the alternative band released the extremely popular “Radioactive,” followed by “Demons” and “On Top of the World.” Each single draws from varying influences—some more pop while others strongly side with alternative—keeping you entertained as they continually change it up.

7pm-8:15pm
Flux Pavilion
Perry’s
Because I’m not experienced in the EDM world, I turned to my friends who saw Flux Pavilion at Spring Awakening last summer who said not to miss this show. They explained that he crosses his signature dubstep with moombahton and even at times drumstep. With his high-energy sets crossed with classics like “Gold Dust,” “Cracks” and “Bass Cannon,” the crowd in Perry’s will be entranced until the last record plays.

8:25pm-10pm
The Killers
Red Bull Sound Select
Because I want to solve the eternal question: “Are we human, or are we dancer?”

Noon-12:45pm
Wheeler Brothers
Lake Shore
The ideal way to start off your Lolla Saturday: beer in hand, shoreline in sight, and the Wheeler Brothers singing their catchy folk single, “Portraits.”

1:30pm-2:15pm
Little Green Cars
Lake Shore
This rural rock band with alternating male-and-female vocalists draws from folk influences while lead singer Faye O’Rourke belts out lyrics like she’s Florence Welch in “My Love Took Me Down to the River.”

4pm-5pm
Local Natives
Red Bull Sound Select
After seeing their show a few years ago, Local Natives hooked me once I heard their song, “Sun Hands.” It exemplifies their indie-rock style with a subtle building of momentum keeping you entranced until the moment the song implodes. They’ve somehow perfected the indie-rock equivalent of a bass drop. Dramatic yet understated, dreamlike yet not dull, they have a style all their own.

4:45pm-5:45pm
Ellie Goulding
Bud Light
She’s got pipes mixed with a unique electro-pop twist that is impossible to disappoint, especially with can’t-get-out-of-your-head melodies like in “Anything Can Happen.”

5:45-6:45
Adventure Club
Perry’s
Adventure Club draws influence from Tiesto and Flux Pavilion mastering the art of dubstep. With experience playing on stages in EDC and Ultra, meccas of the EDM world, their set will not disappoint.

7:15pm-8:15pm
The Lumineers
Lake Shore
“Ho Hey” isn’t all The Lumineers have to offer—their simple, folk-rock sound like in “Dead Sea” and their stripped-to-the-bone “Slow It Down,” make them worth the listen at Lolla.

8:15pm-10pm
Mumford & Sons
I will admit I was torn between The Postal Service and even Steve Angello, but I had to go with Mumford. I’m partial to the combination of the folk-influenced banjo-playing and Marcus Mumford’s one-of-a-kind straggly voice.

Noon-12:45pm
Guards
Lake Shore
This indie-rock band sounds like Arcade Fire meshed with MGMT to create a perfect laidback opening to the final leg of Lolla. Check out their song, “I See It Coming.”

2:30pm-3:30pm
Alex Clare
Bud Light
Besides his hit, “Too Close,” his songs tend to be more jazz-influenced, showcasing a smooth voice that somehow sounds even better live than on track.

4pm-5pm
Tegan and Sara
Red Bull Sound Select
More recently this Canadian folk-rock duo has become more pop-influenced than rock-based and I’m all for it. They’ve grown into this eighties pop vibe like in “Drove Me Wild.”

5pm-6pm
Alt-J
Lake Shore
Alt-J are dub-pop indie-influenced alternative rockers that sound like a morph of Jack White and Coldplay laced with Radiohead (especially in their song “Something Good”).

5:45pm-6:45pm
Dog Blood
Perry’s
Dog Blood is an up-and-comer breaking into the house scene—check out “Next Order.”

6:30pm-7:45pm
Vampire Weekend
Bud Light
Vampire Weekend is an upbeat indie-rock band that doesn’t take itself too seriously. Instruments range from xylophones to orchestras, at times drawing influence from Afro-pop. With a sixties mod vibe in songs like “Unbelievers” that is irresistible to some light foot-tapping, I challenge someone to find a “happy” mix that lacks a Vampire Weekend song—they’re just pure joy.

8pm-10pm
The Cure
Red Bull Sound Select
Don’t get me wrong, I would love to see Phoenix or Knife Party, but after a full weekend drinking in the sun, listening to latest and greatest all the while dreading returning to work the next morning, I think The Cure is just what I’ll need.