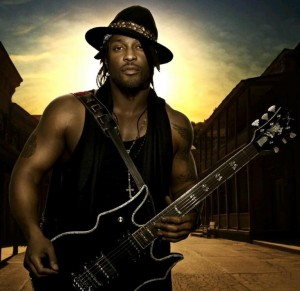 Soul music was born of the friction between pious and secular ecstasy. Many of the genre’s greatest artists came to know impulsive jubilation as children through the gospel. That this same joy is accessible in everyday experience essentially marks the epiphany of the soul singer, perhaps music’s most perfect muse. In the truest sense, D’Angelo is a direct descendant of the tradition. Love, pleasure, pain and redemption radiate through his weathered voice with a sense of ultimate vulnerability. It’s been more than a dozen years since D’Angelo’s name last sat atop a marquee in Chicago. Do not miss him this time around.

A proper follow-up to 2000’s “Voodoo” has yet to be released, the stunning sophomore LP from the Soulquarians member, but that hasn’t stopped ?uestlove of The Roots from fanning the flames with praise for D’Angelo’s recent recordings. The ever-reclusive artist has had brushes with the law in the interim, but appears to be right-minded and ready to revive a remarkable talent for songwriting and performing. Already an accomplished keys player, D’Angelo’s compositions as of late have found him on guitar channeling the best of Prince with a dash of Parliament. What makes the combination so compelling has less to do with the musicianship, which is fantastic, and more to do with D’Angelo’s powerful command over an audience. Got a pulse? Then I’ve got a plan for you this Wednesday night. You may want to ask off Thursday morning, too. (Kenneth Preski)