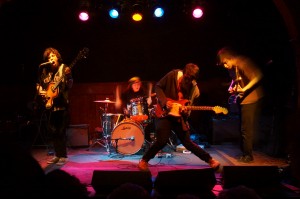 Two years ago, the members of Chicago band Twin Peaks (lead singer Cadien James, bassist Jack Dolan, drummer Connor Brodner and guitarist Clay Frankel) were high-school students at Jones and Lane Tech. One year ago, they were touring basement shows along the West Coast in promotion of their debut album, “Sunken,” and gearing up for college. But now, college has been left behind. “Sunken” has been rereleased on vinyl under the Autumn Tone record label and attracted the notice of the likes of Pitchfork and SPIN, while the band prepares for a more expansive tour with Foxygen that includes appearances at festivals like Outside Lands and RiotFest Chicago.

“It’s been really quick; it’s gone really fast,” James says of the last year. “We’re traveling, we’re working on songs, we’re doing these cool shows, we’re getting emails all the time and talking to different people all the time. It’s kind of a crazy juxtaposition with ‘Sunken’ put out through a label on vinyl and the tour that goes with that. It’s very exciting.”

It’s easy to pinpoint why Twin Peaks’ buzz has built at such an exponential rate. They are a likeable, energetic group of kids with an obvious passion for the rocking music they play. That music has earned monikers like “garage rock” and “pop punk,” though James says he doesn’t like to think too much about such classification.

“I read a couple write-ups and reviews off the bat but then I stopped ’cause people will say things about you and, whether it’s positive or negative, it’s gonna get to my head,” he says. “I think there is a subconscious thing where if you read enough of that stuff and see how people are labeling you, you might think, ‘oh that’s what I do.’ It’s not worth pigeonholing.” 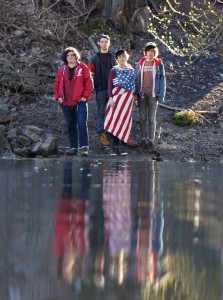 What do musical genres even mean these days, anyway? People certainly don’t separate into groups or cliques based on what music they like, and even when they do, such barriers aren’t absolute. When I talked to James at Schubas Tavern before Twin Peaks’ concert last Wednesday celebrating the rerelease of “Sunken,” “Nevermind” was playing on the overhead speakers. If Twin Peaks had been contemporaries with Nirvana, it’s easy to imagine them spending their high-school days surrounded by other alt rockers. But when I learned that James and Dolan had gone to Jones, I asked them if they knew another up-and-coming Chicago musician from that school, Chance the Rapper.

“I feel bad, I may sometimes say we were closer than we were because he’s super big now, but we were definitely buddies in high school,” James says. “I got suspended with him, I handed him the spliff that got him his ten-day. I guess I sparked his career, literally.”

Like Chance, a lot of that buzz around Twin Peaks simply has to do with how good their music is. The impact of key appearances at festivals like SXSW, a festival full of music writers and industry insiders looking for the next big thing, cannot be denied. But James isn’t totally comfortable with that.

“I don’t really think that’s cool,” he says. “We come out of a basement DIY scene, and there’s so many amazing bands that will never get that buzz because there’s not an industry rep there who knows someone who writes for this publication or another.”

This sentiment is one indication of the growing pains Twin Peaks may continue to face as they move from Chicago’s underground scene to a more national stage. Another sign comes at their Schubas show, when a quickly formed mosh pit makes it clear who in the audience is a longtime friend of the band and who’s there to check out this new band they’ve been hearing about lately. Plus, James breaks a guitar string near the end of the set, and someone remarks, “See? This is what happens when we play too long.”

Freaking out about fame even though you’re not totally famous yet? Like I said, things move fast in 2013.