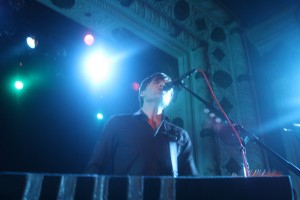 It was hard to take pictures of The Postal Service at the Metro on Sunday. I know some amazing photographers who probably know some amazing tricks that could have helped, but between the dark setting, the fortress of laptops obscuring beatmaster Jimmy Tamborello’s face and singer Ben Gibbard’s constant time-keeping shoulder sway, it was hard to get photos that showed human faces rather than dark, otherworldly light blurs.

Similarly, it’s hard to put a finger on why The Postal Service is so beloved. They only ever made one album together, 2003’s “Give Up,” and as Gibbard notes during the recent short YouTube documentary on the band, “Some Idealistic Future,” the album didn’t really gain serious steam until he and Tamborello had moved back to their main projects (Death Cab for Cutie and Dntel, respectively).The album is obviously good, an interesting combination of Gibbard’s trademark angsty vocals/lyrics and Tamborello’s synthesized soundscapes, and I think some of the songs even surpass the main work of those two. For example, Jenny Lewis’ (of Rilo Kiley) guest vocals on “Nothing Better” (“I feel I must interject here/You’re getting carried away feeling sorry for yourself”) brings a perspective that makes it a more complete view of a breakup than similar songs from Death Cab’s oeuvre. Then there’s the album’s crown jewel, “Such Great Heights,” which has become one of the defining songs of the last decade’s indie rock. It has been covered ad infinitum, and some of those covers (especially Iron & Wine’s quiet acoustic guitar rendition from the similarly genre-defining “Garden State” soundtrack) have become just as famous as the original.

Like many great songs, “Such Great Heights” has moved beyond its creators, and the same could probably be said for the rest of the album as well. For instance, my friend Joel, one of the first people I met who knew a lot about music, has said that The Postal Service was the first band he really got into. These days, he listens to a lot of both EDM and indie rock, the two paths forward from “Give Up.” Maybe it’s the relative uniqueness of that combination that has inspired such passion from listeners.

That passion was pretty clear at Sunday’s Lolla after show, which Gibbard had previously announced would be The Postal Service’s final show. The crowd came out strong, singing every word to opener “The District Sleeps Alone Tonight” and offering Gibbard their hats to try on when he ventured into the crowd later in the set. Since there’s only one album to draw from, the setlist was fairly predictable; if you went to a Postal Service show this season, rest assured you were going to hear your favorite song. They did pull a “Watch the Throne” move, playing “Such Great Heights” twice: once during the regular set and again at the end of the encore as a final cap on The Postal Service’s run. 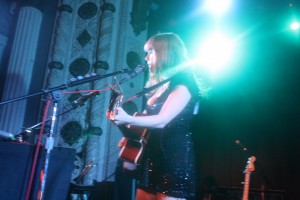 It was a good show, even though fans who, like me, had already endured three days of Lolla definitely had trouble singing along to every song. As is the case with most electronic acts, I think many of The Postal Service’s songs sound better live. That setting lets the band expand smaller songs like “Brand New Colony,” making them bigger by allowing them to breathe.

That said, does anyone really want new music by The Postal Service? After all, they still seem like more of a “project” than a “band.” Watching Gibbard’s trademark lateral stage movements while Tamborello quietly handled the bleeps and bloops in the background was a reminder that this group is a (masterful) hodgepodge of parts from different groups and genres. The beauty of “Give Up,” I think, is that it is a specific artifact from a specific time, both for the artists and the audience. Gibbard says in “Some Idealistic Future” that he wrote the songs on “Give Up” at the same time he was making Death Cab’s “Transatlanticism,” at a time when there was nothing more important in his life than making music. If he and Tamborello made more Postal Service music, it would be coming from a completely different point of view, and might alter the relationship many listeners have with this record, which is a portal to a formative time in their lives. Some stories need endings.