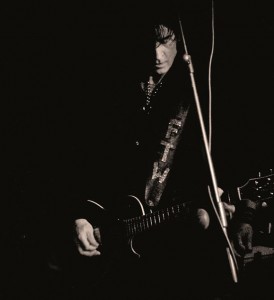 Maybe he should be dead. Maybe he shouldn’t be. But he should probably be better known. Starting out with bands like Fury, which recently had a single reissued by HoZac, Sonny Vincent’s been plying what would eventually be called punk since the early 1970s. By the time a proper scene coalesced around CBGBs, Vincent had already done his fair share for the music and founded the Testors. And while the band would only issue two songs during its initial phase—and not necessarily two of its stronger compositions—Vincent’s persistent touring and recording would glaze the efforts in historic meaning. There’re a litany of stories about the singer and guitarist gettin’ busted by cops, gettin’ sent up and being bonkers. But as always, the tag of insanity seemed to just get pinned on the guy for being a weirdo in the days before record companies thought up the phrase “New Wave” to soften punk’s image. After disbanding the Testors, its work eventually being anthologized on “Complete Recordings, 1976-’79” by Rocket from the Crypt’s imprint, Vincent decamped to Minneapolis, hooking up with the Twin-Tone Records crew, swelling his contemporaries to include everyone from the Dead Boys to the Stinsons. For a time, he even served as the connective tissue in Moe Tucker’s post-Velvet Underground band.Tours ensued, as did more recordings—at least twenty bear the guy’s name at this point—and trouble followed. Vincent’s been kicked out of more countries than most people have visited. But as his cohort limps off to the graveyard or straight day jobs, he continues to reel back and unfurl rock stuff with any number of his bands. (Dave Cantor)