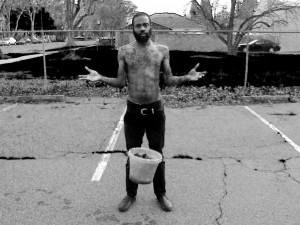 Scheduled into one of the headlining sets of Lollapalooza’s second day, and for a sold-out performance at The Bottom Lounge, the night prior, Sacramento-based band Death Grips (described variously as noise rock, noise rap, experimental rap and thrash rap) skipped it all. At The Bottom Lounge there was only a large projection of a fan’s suicide note behind the stage, and the venue’s announcement, moments after they themselves had learned, that the band wouldn’t be coming. In a reaction of incalculable irony, fans then rushed the stage to destroy the band’s equipment, as Death Grips’ angry, caustic tones played over the P.A.—but it later came out that this was not, in fact, their equipment. The next morning, it became clear that they never even got on a plane, and their Lollapalooza set was cancelled. Everyone had been gamed.

The internet exploded with this news. And this wasn’t the first time that Death Grips has scorned their fans, eager to see them—they’ve cancelled large stretches of tours, before, to work on new material instead—or upset the booking and distribution titans of the industry, either. Their most recent album, “No Love Deep Web,” was set to be released by Epic, but the band released it for free instead, on their website, with an erect penis on the cover art. An act of defiance that, after Death Grips refused to undo it, had them dropped from the label.

Many have called foul on the band, and they’re not necessarily wrong to do so—there is something willfully malignant about Death Grips’ decisions, and their treatment of people who want to respect them. But one must consider the landscape for up-and-coming musicians; it is, in a word, bleak. It’s no longer feasible to make a living just by selling recorded music. Recorded music, because of thrift-seeking, illegally-behaving people everywhere, is now so totally free. An artist must capitalize on their own demand in several other ways, most notably by playing live shows as often as possible, so to collect booking fees and parade a shop of purchasable goods—clothing, posters, LPs—across the world. No human being wants to be so taxed, so homeless, and so exploited. And so as much as fans and critics profess to love and care for the music of Death Grips, and other bands born of this era, they’re having a hard time saying it in dollars—myself certainly included.

Put in other terms, it’s easy to see why an artist might see their contemporary audiences as antagonistic, even the enemy, even evil. If restaurant owners were suddenly subject to a national plague of diners-and-dashers, wouldn’t it come only naturally that they withheld their goods more strategically? This is not to defend the band’s disappearance (I personally will make no plans to see a band that might game me in this way), but to put it in perspective. The power of the internet has changed the culture of music forever, and artists are finally finding more creative, effective ways to react to this.

Rather than lump his newest effort in with the rest of the over-promotion and over-coverage of bands filling up blog and e-zine spaces, Kanye West opted to promote “Yeezus” through a series of guerrilla projections of his “New Slaves” video onto urban buildings throughout the country. This video is not available on the internet: only videos of the video are.

The Arcade Fire has begun to unveil a new campaign for their coming album, ostensibly titled “Reflektor,” which is what the mysterious stickers, graffiti and chalk etchings littering cities now spell out—I found a sticker slapped to a bus stop today, and texted several friends about it.

What this trend should remind us of is that smart artists who want to live well are concerned, above all, with extending their capital; with extending their demand. Due to their most recent antics, Death Grips became one of the most buzzed-about bands at this year’s 300,000-person Lollapalooza—and they weren’t even there. Unless they’re totally blackballed from venues—they won’t be—the group can now point to a significantly extended fan-base, ask for larger booking fees, and receive them. At the end of it, no matter how much moralizing is done, Death Grips won this altercation. And if their gaming continues to be as creative as their stunning, singular music, they’re set to beat the audience all over again, and—ultimately—make them pay.