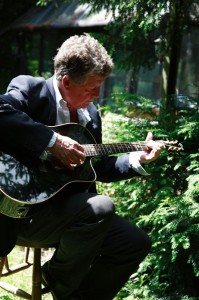 He says the album’s recording wasn’t hijacked back in 1968. But if Nick Garrie didn’t think “The Nightmare of J.B. Stanislas” existed in bastardized form, he likely wouldn’t be traversing the Atlantic Ocean to set it all right.

Written during fits and spurts of studying, busking and general hoboism, Garrie worked up a clutch of folk songs and intended to set the compendium to tape. Solo: just him and a guitar. He’d landed a deal with a French imprint to record and issue the disc. And everything was cued up, ready to swing. Then the singer showed up at the appointed studio, and there was a fifty-six-piece orchestra awaiting his arrival, prepared to accompany him on twelve tracks that would eventually become “Stanislas.”

What resulted is a surprisingly facile and startlingly varied work, with tunes arranged by Eddie Vartan. It’s just that no one would confuse “Stanislas” with a folk album. Garrie says Vartan did his best. But from the guitarist’s remark, it’s clear the finished product never represented what was kicking around in his head.

Songs like “David’s Prayer,” with strings propping up Garrie’s guitar melody, are hard to imagine unadorned. In fact, from any cursory listen to the album, it’s apparent that despite Garrie’s voice perfectly evoking the emotion each song calls for, “Stanislas” would suffer considerably if it was simply rendered as an acoustic guitar album.

Adding to the convoluted feelings Garrie expresses about the album—he says “Evening” and its disjointed horn accompaniment best represents what he was aiming for—Barcelona’s 2012 Primavera Sound Festival hosted the singer and a string section. And he performed portions of “Stanislas” alongside newer work. Why he disavows the recording because of its affectation, performs it several decades later with accompanying strings and then sets off across the ocean to perform the work in its entirety as he initially concocted it makes little sense.

But Garrie’s work is a bizarre thing itself.

The faux-country on “Queen of Queens” sounds hackneyed at best. And upon the album’s reissue in 2010 on the Elefant imprint, something of a sister track was revealed—it was actually the first single Garrie issued. “Queen of Spades” bounces along with a vaguely Doors-y abandon. And the squalid electric guitar punctuating Garrie’s verses makes the thing a lost psych nugget. But the sixty-four-year-old doesn’t like that song, either. It’s a pretty good track, though.

In the forty-five years since “Stanislas” was released, Garrie’s played across Europe at festivals and in more intimate settings. But prior to his five-date jaunt in August, he’s performed in the States just once. It’s not that his music’s being understood differently and re-examined every few years, but with the broad cataloging and unearthing of music that didn’t quite impact the culture on its first go-round, Garrie and a few similar figures have been given the opportunity to re-emerge.

Sixto Rodriguez, a Detroit-bred singer and guitarist, appreciated substantial popularity in South Africa in addition to having his work sampled on a Nas album. It never translated into acclaim at home during the seventies, though. And while Rodriguez and Garrie have been compared because of fame passing each by during the early portion of their respective careers, it seems Garrie’s ultimately unconcerned with folks uncovering his legacy and likely wouldn’t play a part in a documentary like “Searching for Sugar Man.” And that—apart from his initial recordings–is what’s most endearing about the singer and his unkempt career. He remains unencumbered by anything that resembles the desire to further himself professionally. 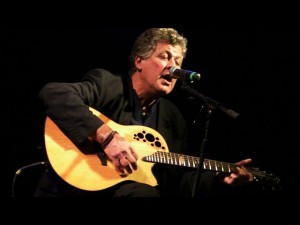 “I’m probably what the French call a ‘chansonnier,’” Garrie opines in one of his characteristically truncated answers via email.

He’s not a pop singer and really didn’t feel it necessary to become an adjunct to the psych-folk thing that solidified around sixties rock and pop. He’s just a rambler.

Prior to the two weeks he spent putting “Stanislas” together in the studio, he was studying at Warwick University, but was unable to return to his family home in France because of a sticky residency issue that would have landed him in the army. It was all cleared up, but Garrie says he was essentially homeless during that limbo.

The several years on either side of 1968 and the release of “Stanislas” sound like some bohemian vision, with figures entering and leaving Garrie’s life just like a gust of wind disperses smoke at the end of a cigarette.

On the “Stanislas’” reissue, a duet called “Cambridge Town,” worked up as a demo, includes a slight-voiced woman with an accent accompanying the guitarist. As they trade lines, a pastel sadness floats around Garrie’s descending melody. But no one knows who that woman was.

“[She was] a girl I met on the beach in St.Tropez—she lived near the recording studio,” Garrie says. “I wrote the song the night before and asked her if she’d sing it with me. She did, and I never saw her again—and I don’t remember her name.”

It’d be impossible to trace the number of people slotting into Garrie’s life that way—he’s worked atop mountains, teaching skiers and toured Spain with Leonard Cohen. Getting ideas down in couplets, though, helps him “grab on to bits of life before they slip away.”

So, maybe the purpose of this little tour’s just to snag a few more memories before it’s too late. It’s even possible the singer’s going to be satisfied with how it turns out.