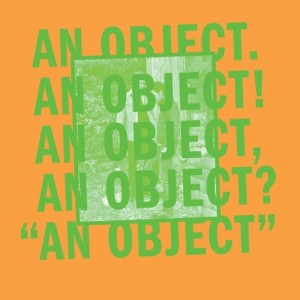 No Age’s latest is being listed as “An Object,” but the LP’s cover art says “AN OBJECT. AN OBJECT!  AN OBJECT, AN OBJECT? ‘AN OBJECT’.” And what better way could there be than this, this title which looks like Gertrude Stein’s idea, for the band to announce its faith in the boutique-art vein of rock ‘n’ roll that’s long been the frontier of the genre?

The sounds that follow largely deliver in this spirit, too, as the tension throughout the collection is between the ghosts of seminal punk and its endless swaths—oceans—of multi-layered guitar paint. It would be easy to say “post-punk” when talking about No Age, but the suggestion of a track title like “Running From A-Go-Go” is that the duo has thought through this tension in an authorial, modern way—they’re closer to the honor of not being genre-trapped, and earning the honorific (or, depending on your outlook, stigmatized) label of “experimental.”

2010’s “Everything In Between” left something to be desired for fans of the band’s more enigmatic bent—but it also proved without doubt that they could compose killer melodies amidst lucid, catchy arrangements. And the capacity for succeeding within convention is an item oft-unchecked on the lists of auteuristic accomplishers; and is, to boot, almost always a launching pad for better ambles into the unknown.

“An Object” is such an amble. While reverting to the balance of their first two albums (in which punk bombast and catharsis gave punctuation to intensive sonic landscaping; not the other way around, as on “Everything In Between”), No Age also pulls a newfound vocal bravery from their last work. The singing is no longer buried to needless degrees in lo-fi wash, and the payoff in clearly hearing what drummer/singer Dean Allen Spunt has to say is a large one. On opener “No Ground,” this means Spunt affirming the sloppy crawl of searching for identity suggested by the album’s full title.

And this struggle continues throughout—“speaking in shapes,” Spunt sings on “An Impression,” looking for the right language as he addresses his ballad’s subject. The album shapes into a thirty-minute freewheel of punk genre exploration, slowing down for ethereality when it needs to, with the songs always just barely getting their claws through the sheets of noise that tell of a devastated landscape—of a context in which everything musical is post-something, and so where else could songs come from, if not from these ceaseless murmurs of warbled kitchen-sink feedback?

No Age’s journey toward a new rock ‘n’ roll is best seen in ‘Running From A-Go-Go,” in which a Ramones-y title gives way to a Ramones-y melody, and one wonders what punk rock would sound like if it were depressed and slow enough, but still had enough skip to make its way through a factory of electro-bugs in three minutes. The song manages to breathe life into what, from virtually everyone else, sounds like the tired flailing of niche, preying on the unsuspecting angst-hoarders that are teenagers. “An Object” is that rare thing, often promised, hardly delivered, mostly wishful thinking and treacherous marketing falsehood: it is rock ‘n’ roll music for adults. (John Wilmes)

“An Object”
No Age
Sub Pop