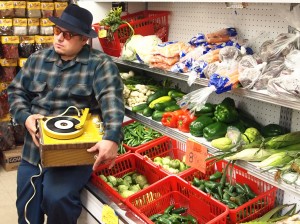 If Indiana Jones were a vinyl junkie he’d carry a portable turntable instead of a whip and stop at nothing in his quest for that single-most-desired glossy black platter with its circling grooves. Imagine him, if you will, standing between a wilting ceiling and a floor littered with records, dark and stinking with the decay of years sitting abandoned in New Orleans’ Ninth Ward. Or at the back of an unmarked bodega in a New York borough, having nobly solved the mystery to its secret whereabouts. Truth is, these adventures do belong to someone, only he goes by the name Rambo.

Thirty-two-year-old Minneapolis-based DJ Rambo Salinas has been building his record collection for the last third of his life. While other vinyl enthusiasts base their compendium on quantity, bragging rights or market value, Rambo is in pursuit of a greater mission. His quest began with the decision to focus on collecting Chicano Soul and Sweet Soul Lowrider rolas—genres from San Antonio and Los Angeles, unknown to most, aside from the generation of Mexican-American baby boomers. His own South Texas-Chicano background is just half the motivation. The other is simply to share the music and provide the rest of us with a sense of the time, place and culture from which Brown-Eyed Soul was conceived by way of his guerrilla compilation titled “Lone Star Soul Vol. 1.”

Last October, Rambo hawked his possessions, quit his day job, and stepped back from Hotpants, the popular funk and soul dance party he’d helped establish in Minneapolis, and headed down to Texas in search of forty-fives and the story of the Westside Sound. He scored the gig of a lifetime, DJing at a bar in San Antonio called Salute. “It was the real deal. The only old-school bar on the strip. All the veteranos played there.” There, he met fellows like Joe Jama, Max Baca and Flaco Jimenez, who helped create the Tejano and Chino Soul scene back in the day. Unfortunately, finding steady work proved impossible. He returned to the Midwest just after six months but with far greater understanding of how Westside Sound came to be. “The kids grew up listening to what their parents listened to, rancheras, boleros, cumbias. All the classics. They brought their roots into the music making it a different sound.” Groups like Sunny and the Sunglows, the Royal Jesters and the Eptones played traditional Mexican orquesta horns and Hammond B3 organs and laid sweet soul vocals of guys like Sunny Ozuna and Joe Jama on top. “That era left a huge mark on San Antonio,” states Rambo, “I hope to keep it alive.” (Jessica Burg)