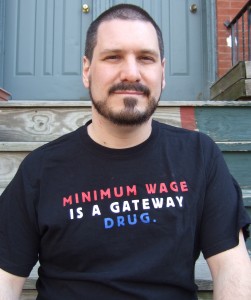 Although Marc Ruvolo has toured a fair bit, he’s lived in Chicago all his life. From a couch in the Logan Square apartment he shares with his partner, Ruvolo, the forty-seven-year-old former lead singer for punk rockers No Empathy, and more recently of Das Kapital and The Fur Coats and owner of record label Johann’s Face, explains what has prompted him to sell most of what he owns and embark on a global adventure.

Up until two weeks ago, Ruvolo was also the owner of Bucket O’ Blood Books and Records in Logan Square, but now he’s sold the store he built from the ground up over three years to some longtime customers. Selling the store had always been part of his plan, although at the beginning he didn’t know whether it would be a success. “I like challenges,” he says, and given he had never worked in retail before, he knew he would have to “work hard and bust ass… I put all my energy into it, in the hopes that I would sell it and then head out and travel the world and play music.”

Now that Bucket O’ Blood is under new ownership, Ruvolo will now sell everything else he owns “except for a laptop, a phone, an instrument and clothes.” Although he admits he hates sounding old by saying it, the younger generation doesn’t own anything anymore. “A lot of people I know don’t want to own anything, and I find that weirdly refreshing. I’d like to see how living like that is for a while and be unencumbered.” He started Bucket O’ Blood with his own collection of books and records, and has always “had collections of things, records, books, a lot of being tied down, mortgages, leases… I’d like to be free to go and see things, before the worldwide police state clamps down finally and nobody can go anywhere ever again,” he concludes with a hearty laugh. But then he adds, “Which I think is coming.”

While on the surface, leaving Chicago behind may seem to be a sea change, for Ruvolo it’s more of a continuum.  “This is also something I did in the past: I would work very hard for a year or two, save up all my money and then take a year off and just play music exclusively, and try to make money from music and extend those savings as long as it was possible, playing music.”

His partner of four years, Joel Midden, is also a musician, creating electronic music using a laptop in addition to traditional African instruments like the karimba, the kalimba and tank drum. Midden is the driving force behind Bastardgeist, a quartet who’ve just released their second album. Midden and Ruvolo will not only be traveling together, but they’ll be touring together as musicians too—performing at the Icelandic Airwaves Festival in Reykjavik this fall, for example.

Leaving Chicago for an extensive tour is an idea Ruvolo and Midden had discussed for years, but the timing was never right. When Bucket O’ Blood had a flood last year (the water kind, not  the blood kind), and when Ruvolo’s appendix burst, that “definitely put the period on the sentence.” They stopped putting things off and “decided that it’s now or never. While I’m still in decent health and I can still sleep on floors,” he laughs, “I want to try to travel as much as possible and play.”

The pair plan to be out on the road for at least six months and maybe much longer. In addition to the forthcoming EP under his own name, Ruvolo has just released an EP from his Klaus Nomi-inspired alter-ego, Aspic Tines, and a full-length from The Fur Coats, called “The League of Extraordinary Octopi” is slated for release next May, so there’s no shortage of new music to play and promote.

“I like challenge,” Ruvolo reiterates. “I love new things, so that’s when I’m most happy, when I’m trying to make new things happen. It may be frustrating to me, it may not work, but I love banging my head against that wall, that’s why I’ve been a musician for twenty-five years. [The wall] never comes down, because there’s always another wall behind it, but it moves a little bit and then you get that satisfaction,” he laughs, “of doing something.”

How? “I just do it. I don’t look back, I create and I move on. It’s what keeps me going… this is how I will ultimately be remembered. I’m hoping for that posthumous critical reevaluation by the obscure blogger,” he says, with a laugh, “who says, ‘Hey, this guy was actually a genius!’”

See the new video for Aspic Tines’ “Do The Sex”: