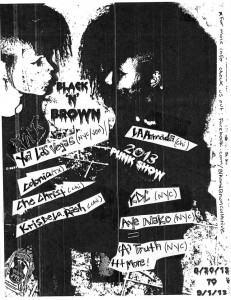 Much like the city overall, Chicago’s live music scene is unparalleled in its diversity but woefully segregated. Chicago’s DIY punk scene is sadly no different. Despite bursts of activity and efforts to bring like-minded bands and artists together, many underground creative communities mostly move in their own cliques, separated primarily by neighborhood, race, class or even gender. Community organizers Dont-e Disaster and Monika Estrella Negra saw a need for a unified punk scene and started the Black and Brown Punk Show in 2009. “We saw intense segregation between the scenes: the North Side, which was primarily white guys, with the occasional girl band, but no people of color, or shows on the West Side that were mostly brown, but with very few black people,” says Dont-e Disaster. “You get a sense that people are living very similar lives, but don’t know how to talk to each other or inhabit the same space.”

The first Black and Brown Punk Show started as a one-shot event with less than a hundred attendees but has grown into a year-long curated series organized by a collective of more than twenty members. This year, the collective received a grant from the Critical Fierceness Fund in memory of performance and visual artist Mark Aguhar, and will expand to an extra day of music and workshops at Center on Halsted, 3656 North Halsted.

Past years have integrated synth-punk, DJs, drag and other musical and cultural elements that challenge the punk purist mindset. “The drag show [in 2011] was great, because we used that theme to force conversations about machismo at punk shows, to negotiate what it means to be in a space where your way of being isn’t the dominant one,” says Dont-e.

The show kicks off on 6pm August 30 at UE-Hall, 37 South Ashland, moves to Chi-Town Futbol, 2255 South Throop on August 31 and ends in Union Park on September 1. See facebook.com/blkandbrwncollective for the full schedule.