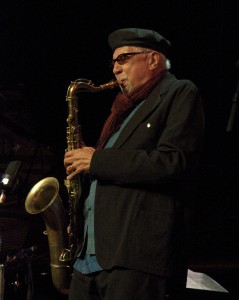 Drawn from an historical Memphis, one with Howlin’ Wolf and his musical brethren stalking rent parties, saxophonist and flautist Charles Lloyd made his way to Los Angeles, bolstered by hope of picking up what he could about Hungarian composer Béla Bartók.

Once ensconced by the University of Southern California and academia, Lloyd heard a voice from outside those cloistering walls. And it was Ornette Coleman.

“We used to practice together and argued a lot about music,” Lloyd says about his formative years in L.A. with Coleman. “We have a deep love and respect for one another.”

Finding a fertile West Coast scene littered with talents like Eric Dolphy, Gabor Szabo and Coleman, it’d be expected that Lloyd would settle into one of the largest markets in the country and help ferry jazz through 1960s tumult. And listening to the Memphis native on Chico Hamilton recordings from the period, it’s difficult to ignore the free-eclecticism seething from Lloyd’s lopping lines as he engages with the percussionist in a “Mallet Dance.”

“When Chico let me be his music director,” Lloyd says of his Southern California sojourn, “I got to choose the musicians and be the composer of most of the songs we performed.”

It was on those recordings that Lloyd first plotted out “Forest Flower,” a song that would rightly or wrongly, define this early phase of his career. At least four versions of the composition were released during the sixties, and one comes on a live album bearing the song’s name.

Lloyd’s composition followed him to New York, a city he describes as jazz’s mecca in its heyday. It followed him to Europe and the U.S.S.R., an unheard of occurrence amidst the Cold War. It insinuated itself into hippie culture, Lloyd counting the Grateful Dead, John Densmore and David Crosby as ardent disciples.

But after traveling the world, performing for a generation uniquely engaged with rock and jazz simultaneously, Lloyd disbanded his group. He headed up a mountain, seeking peace and time alone.

“The move there was one of the most important decisions and periods in my life,” the saxophonist says of his move to Big Sur during the early 1970s. “It might seem like disappearing into a void, but I had to face myself every day and work on my inner life.” 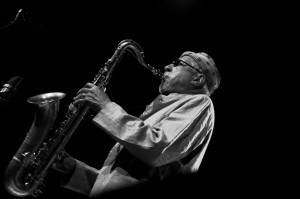 With spiritual concerns redolent in his music, it’s unsurprising that Lloyd felt it necessary to wrestle with whatever was roiling within him. But the mystique that’s sprouted about his removal from society seems overblown.

The beginning of the 1970s saw a drop-off in recording, with an album a year under his own name being issued between 1971 and 1973. During that time, though, Lloyd also contributed to the Beach Boys’ “Surf’s Up” and the “Holland.”

“They were fans of my music, and I really dug ‘Pet Sounds,’” Lloyd says of the collaboration. “Brain Wilson is a genius composer, so it was a natural thing for me to record with them and vice versa.”

He can’t pinpoint it, but the 1974 Gabor Szabo album, which features a live rendition of his “Sombrero Sam,” might have been recorded just before heading off to Big Sur. And by 1978, he began issuing new work on a regular basis. So, the self-imposed exile was less than four years, but came at a time when Lloyd might have been at the height of his powers and surrounded by a floundering hippie culture, looking for a center to hold to.

He wanted to effect change and clearly saw issues that needed to be addressed in the immediate culture and more broadly throughout the country. At one time, Lloyd felt music could change everything. But came to learn that revolution begins with the self.

“I am not as naïve about changing the world,” he says. “But I often think that with all of the harshness out there it can use more tenderness. That is my offering. I am in service.”

A utilitarian sense of navigating the world might have set in, but it hasn’t lessened the amount of musical proselytizing Lloyd does.

Amid traipsing the globe, folding ideas into themselves and attempting to create an ever-new spiritual place with his music, Lloyd still encounters players who serve to inspire him. And as always, he has a pretty keen eye for talent.

“We met backstage after [a concert] in Carnegie Hall,” Lloyd recalls. “I remembered the encounter and the warmth of our exchange, so when [my piano player] had a scheduling problem … I decided to check out Jason. It was not based on his playing—it was purely instinct.”

Becoming an integral part of Lloyd’s ensemble, Moran’s recorded several albums with the bandleader, including “Hagar’s Song,” a collection of duets, released this year on ECM. Lloyd sees Moran as “one of the keys to the global future of jazz.” And it’s difficult to dispute the perspective given the pianist’s hardy résumé.

But jazz likely isn’t going to appreciate a swell of popularity. Lloyd can’t expect it to. Since his first performances in Memphis to recent festival gigs in Europe, the saxophonist has been striving for a mode of expression capable of extolling his worldview and strong enough to relate a sense of freedom. Whether or not he’s accomplished that is intangible, but his trek—one of internal reckoning and another of broad communication—is certainly still in bloom.