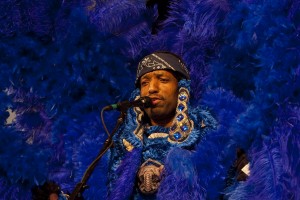 In the beginning of his career, saxophonist Harrison was billed as Donald Harrison Jr. out of respect for his well-known father, Donald Harrison Sr., whose stature as Big Chief in New Orleans cannot be overstated. The Mardi Gras Indians to this day foster a tradition centuries old, where slaves would gather on Sundays in Congo Square, the liberal epicenter of African dance and music in a city fraught with violence and death. Contemporary Mardi Gras Indians are known for their elaborate warrior outfits, fitted with feathers and beads of eye-catching beauty, immaculately placed atop a design of intimate political resonance. During parades, the Indians find solace in singing, their chants burst through crowds of tourists during Mardi Gras, their march unmistakable and moving and surprisingly joyful and invigorating. During the off season, Big Chiefs are community leaders, and every so often their roaring voices are beckoned forth by recording artists like Harrison, as evidenced by his vastly underrated 1992 classic “Indian Blues.” While splitting his time between a budding bebop career in New York and an inescapable allegiance to NOLA swing, the young Harrison corralled his father into the studio for a session of unforgettable vibrancy. If the story sounds familiar, you may have seen the second season of HBO’s “Treme,” which lifts a great deal from Harrison’s life, and happens to feature his acting as well. Now a Big Chief in his own right, Harrison is bringing along The Congo Square Nation to celebrate a moment of impulsive jubilation in spite of inheriting a legacy of American atrocity. Even if it birthed jazz, perhaps America’s truest art form, the historical ancestry of slavery remains a permanent blight on our country’s ambitious ideals. It takes the power of performance to conjure the equalizing ecstasy in us all, something the Mardi Gras Indians specialize in.
(Kenneth Preski)