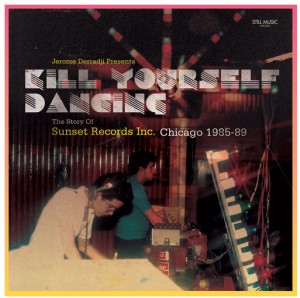 There’s no question that Chicago prides itself on being the Bethlehem of house music, but its definitive history is still being uncovered and put into order. The Sunset Records Inc. story’s unique arc has seemingly gone unrecognized until now. We can thank the local record label Still Music and its founder, Jerome Derradji, that we know its story at all. Since 2004, Still Music has dedicated itself to reviving rare American dance music gone lost by reclaiming its infancy in the form of remixes, remasters, biographies and documentaries. Last year, Still Music put out “122 BPM: The Birth Of House Music,” a two-disc compilation of Mitchbal Records and Chicago Connection Records artists along with extensive liner notes chronicling the labels from beginning to end.

The story of Sunset Records Inc. begins around 1980 with five teenagers, Matt Warren, Miguel Garcia, Ralphi Rosario, and brothers Alex and Robert Rojo. Together, they were the DJ collective Sunset Mobile Disco, reputed as being the best on the North Side. Daring to be eclectic, they became known for mixing disco, new wave and salsa, as well as rocking the most powerful sound system. As their popularity grew so did their ambition. SMD went from booking house parties to exceeding capacity at the Rizal Center in Uptown, to packing larger spaces like the Aragon and the Golden Tiara. In 1985 they distinguished themselves as the label Sunset Records Inc. with the release of their first track. Their legacy (and house music) was just beginning.

Enter Jerome Derradji. Seven years ago in an Oak Park thrift store, Derradji, who is first and foremost a DJ, was flipping through the stockpile of discarded twelve inches when the boxy, black candy-striped letters of the Sunset insignia caught his eye. It was a copy of “Face The Music” by Boom Boom and The Master Plan (1986). He brought it home and was surprised to discover something he hadn’t heard before: an amalgam of early Chicago house and new wave. While on tour in Europe and New York, it stood out as a crowd-pleaser. Derradji searched for more tracks from the Sunset label as well as any information he could find about its history. This led him to reach out to Matt Warren, who answered the call.

Together, along with Miguel Garcia, Still Music has assembled a two-part compilation of the label’s talented roster that spans the entire history of Sunset and Matt Warren’s second label, AKA Dance Music. The first part, “Kill Yourself Dancing: The Story Of Sunset Records Inc. Chicago 1985-89,” features remixes, bonus tracks, photographs, and an in-depth profile written by Jacob Arnold, effectively ratifying this release a collectible artifact of Chicago’s music and club scene history. (Jessica Burg)