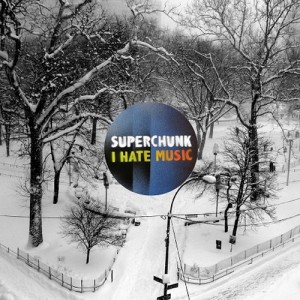 It might seem weird for Superchunk, an influential indie rock band that has released nine revered albums in twenty-four years, to title their tenth record “I Hate Music,” but time will do that. You grow older, problems get more complicated and a trip to the record store no longer really solves them.

“I hate music,” Mac McCaughan sings on the lead single, “Me & You & Jackie Mittoo.” “What is it worth? It can’t bring you back to this earth.”

If that sounds excessively pessimistic, don’t worry. In a breezy thirty-eight minutes, Superchunk delivers the catchy hooks and clever lines that have made them so great since their brilliant 1990 self-titled debut. But the band’s unique magic has always rested in their ability to blend upbeat, high-energy indie rock with down-in-the-dumps lyrics, and that duality is even more pronounced on their newest effort. Everyone in the band is growing older, well into their forties, turning this into an affair about aging. What sets this effort apart from similar works is the way the wintry theme is set to music that rocks with the rushing exuberance of youth.

“Low F” is a standout, a hooky rocker that reminds one that sensitive music doesn’t have to sound sensitive, and shows off McCaughan’s wit: “You caught me singing, asked me to meet you down at low F/I missed your question, but you heard my answer, Yes, yes.”

A brief punk track, “Staying Home,” is a notable nod to the group’s fuzzier, more DIY-influenced work that eventually gave way to the more polished sound of 1997’s “Indoor Living,” 1999’s “Come Pick Me Up,” and 2001’s “Here’s to Shutting Up,”—their last before taking a nine-year break from recording. This is Superchunk’s second album since returning from that hiatus, a follow-up to 2010’s acclaimed “Majesty Shredding.” Like that album, “I Hate Music” shows a band so comfortable with who they are that the music sounds effortless.

But their latest, without resorting to sentimentality or melodrama, peels back the curtain to show what must plague every band whose members nearly qualify for an AARP card. How does a reasoned adult continue to traffic in the culture of youth, even if it’s a culture you helped to create, but have now grown out of?

I remember seeing the Get Up Kids at Summerfest in Milwaukee a couple years ago. It was a great show, but it was also just so weird. The age range of the crowd was probably twenty-three to thirty-eight, and all of us were there to watch a thirtysomething man sing about getting dumped by his high-school girlfriend. It made me wonder what’s going through sixty-nine-year-old Roger Daltrey’s head when he sneers, “I hope I die before I get old,” or when the guys in KISS don their makeup for the 8,000th time to implore you to pull the trigger on their love guns.

To some extent, I think there’s some pretending going on, both on the part of the audience and the performers.  Within the space of the records, or the two-something hours between taking the stage and that final encore, I think the passing of time vanishes. That is, for a little bit, both audience and performer can pretend that time hasn’t passed, or doesn’t exist at all. This is the special power of music.

“I Hate Music,” is an album about growing older while still feeling like an adolescent. McCaughan and company still clearly believe in that power, but no longer with the unbridled idealism of youth. They still turn to music as a reprieve from their problems, but with the realization that maybe it’s not quite enough anymore. (Eric Lutz)