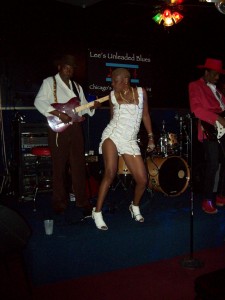 Hours before his entrance, a red carpet is laid out, making a path from his RV to the club’s side door. From the outside, shadows inside the vehicle can be seen…talking? Drinking? Grinding? Is it really your business?

You weren’t invited, so keep walking. Just go to the club’s corner entrance, pay your cover, and claim the black swivel stool at the end of the S-shaped bar, the one about ten feet away from the stage.

Two—or was it three?—glasses of red wine later, the four-piece Mighty World Band (MWB), led by guitarist Sir Walter Scott and his accompanying cats RonRon, T-Man and David, get everyone’s groove going. It’s only about 10:15pm now, and local folks have almost completely filled this intimate space where small tables allow just enough room to roam. With a seating capacity that maxes out at about fifty, one can’t help but commune mentally, spiritually, and sometimes physically with the blues created right in front of your face.

After the MWB has carved out and settled into the pocket, the featured front man’s name is shouted triumphantly over the mic. The band plays his sublime, celebratory theme song, and that side door you had walked by earlier opens. A middle-aged brother named Sherman “Moody” Thomas glides in wearing a cape and crown. An assistant helps remove his royal regalia, and Thomas, the King of Everything right now, takes the stage, squares up with the mic, and launches into a new tune, matching the energy already established by the Mighty World Band.

Such scenes highlighted a recent Saturday night at Lee’s Unleaded Blues, a sixty-seven-year-old establishment in Grand Crossing. For the loyal blues lovers that attend Lee’s, the club’s rebirth in mid-February, after a nearly four-month hiatus, has been made possible by Darrin Mahlert and Pamela Benford. This past January, they agreed to manage the club for Yvonne Davis, who took over Lee’s after Stanley Davis, her husband, died in 2010. Stanley Davis was a retired police officer known by the regulars as “Sarge.” His framed photo, featuring his wide, genuine smile and kick-ass fedora, hangs stage left.

“That photo stays on the wall so he can watch the cash register,” says Mahlert, with a laugh. “None of this would be here without him. This club is a tribute to yesteryear, so we’re not going to make change just for change-sake.”

Located across the street from a trucking company’s warehouse, Lee’s lives on a non-residential block. Yeah, Mahlert has heard some folks question the club’s surrounding area, but he sees it as a positive. 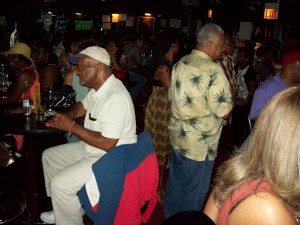 “You are on the South Side. You are in a blues club in a brick building. We don’t have a fancy stage, but this is a clean, well-run operation. We’re not using plastic cups; we’re using glassware,” he says. “Our hardest job is getting people into our front door the first time. But once they hit that door and have spent the night here, we have them as a customer. They have a great time.”

Before reopening Lee’s, the new managers had to repair a snapped floor beam. Once the club reopened, returning regulars noticed new flat-screen TVs at the bar—one which monitors activity outside—and freshly painted walls. Mahlert hopes to add big screens behind the stage by the fall in time for the football season.

For Benford—whose initial reluctance to manage Lee’s caused her to stay away until shortly before its reopening—keeping things authentic has become a welcome challenge.

“A lot of people who wanted to take the club over wanted to take out the crazy-wavy bar and make it neon, but we wanted to keep this a pure blues bar,” she says. “Other people wanted to have house-music nights, but we are not interested in that.”

Lee’s will eventually have an international music night, she adds, with reggae-blues-type bands that attract “the older mature crowd,” but the emphasis will always remain on the blues. With a current core roster that features performers such as Sherman “Moody” Thomas, Shorty Mack, and Tre and the Blue Knights featuring Lady Kat, Mahlert, admittedly, has become possessive and proud.

“We’re probably the most authentic blues bar there is,” he says. “Our tenth-best band would blow anybody out of the water. Shorty Mack is probably one of the top entertainers out here today.”

Carla Roberson, a local who hangs at Lee’s whenever she can, really digs Lady Kat.

“She’s really the life of the party. When she comes in, she brings a lot of positive energy. She’s always engaging,” Roberson says. “She’s willing to dance and get the party started! Just seeing her lively, spirited self makes you want to go ahead and engage.”

On the Saturday after Labor Day, Lee’s plans to feature longtime performer Johnny Drummer in a family party. Drummer, a singer and keyboardist, claims that twenty-two of his relatives play the blues. “Anybody related to Johnny Drummer, from Vance Kelly to Groovin’ Man to Tony, are all going to come in and play as a family.”

While Mahlert and Benford appreciate the regulars, and the visitors from Morocco, Croatia and Italy that have checked out the joint, they want to increase the visibility they believe their acts deserve both in-state and nationally. Within the next six months, three songs from some of Lee’s core acts will be available on iTunes. Specific details could not be given, because, as Mahlert notes, “The ink ain’t even dry on the contracts yet.” Plans are also being made to promote their bands in other cities.

“We want to do shared events in other places, like Texas, Indianapolis and Memphis, kinda like how we did here for Blues Fest, where we had twelve bands for four days straight,” he adds. “We also want to start a record label, do some music videos, and take this to a whole different plane.”

Since assuming daily operations, Mahlert and Benford have added a beer garden behind the club where jerk chicken is sometimes served on the weekends. The goal, Benford says, is to expand the food offerings and delivery service from Bonfire Grill, the eatery they own three blocks away.

Benford, a native Alabaman whose past professional life includes a career in medical sales, says that managing Lee’s is her new love. This passion, she notes, includes its own interesting irony.

“My father was a huge blues fan. My parents had parties all the time, and the blues were always a part of it,” she says, “but my cousins and I hated it. Whenever my parents would start playing the blues, my cousins and I would just go outside.

“And I just know my father rolls over every day in his grave, just laughing because I now have a blues club,” she continues. “Never did I think I would have a blues club, but this is right for me. It is divine.”