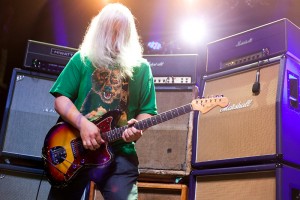 Thirteen concurrent thoughts that afflict the bystander of a bus advertisement featuring this year’s Riot Fest lineup: I had no idea The Replacements got back together. Can you imagine how many kids will be singing along to Fall Out Boy and Blink-182? Can you imagine how many of their parents will be singing along to the Violent Femmes? Even without Kim Deal, I don’t think I can see the Pixies enough. What I wouldn’t do to see Debbie Harry duet with Danzig. It’s possible that Guided By Voices have written enough songs for at least one to appeal to every single person on the planet. Flavor Flav of Public Enemy may be the greatest reality television star who ever lived. One of the two Black Flag reunion bands is playing, and so is X, making this one of the best punk shows of the year. If you substitute Brand New and Taking Back Sunday in their place, the same can be said about emo. In fact, local pop punk bands popular in the 1990s are so well represented by the likes of Screeching Weasel, Smoking Popes, The Broadways and The Lawrence Arms, as to lend the festival an air of well-honed sophistication. Add to the mix the legendary post-hardcore churn of Quicksand and Mission of Burma, and the airy insight of punk’s progenitors embodies a much heavier weight. Lest the festival take itself too seriously, Peter Hook & The Light will be there to throw a dance party, while Reggie and the Full Effect promise a full-blown synth punk extravaganza. The power to swoon of high-priest poet Saul Williams can only be matched by the squalling screech of Dinosaur Jr.’s guitar tone, which may be the strategy for how each year’s kitchen sink of a festival lineup made Riot Fest into one of the proudest parties Chicago’s music community will throw all summer. (Kenneth Preski)