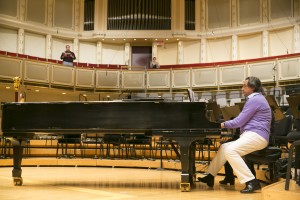 “Buon giorno,” says a sweater-clad Riccardo Muti, seated on his podium at an eerily empty Symphony Center, to a Chicago Symphony Orchestra clad in street clothes assembled for its first rehearsal of Verdi’s “Macbeth.”

“This is a great joy for me, since Verdi is the only composer that I can conduct,” Muti says, poking fun at his reputation as Verdi’s greatest living interpreter. The orchestra laughs.

“Seriously, you gave me the best ‘Otello’ I have ever done from an orchestral point of view,” Muti adds, referencing the 2011 Muti-led CSO performances of one of Verdi’s last operas that like “Macbeth,” is also based on Shakespeare and that has just been released on the CSO Resound label.

“You may think that because ‘Macbeth’ is earlier that it is less difficult music, but it’s not. This work was very ahead of its time. In fact, the operas to follow will be a step back.”

As the orchestra begins, Muti calls out, “Remember, you are in Scotland, and these are bagpipes. Exaggerate the accents. In these two bars are the entire opera.”

As the music portraying the witches is intoned, Muti begins to sing the witches’ lines that the chorus will sing. This is an orchestra-only rehearsal, and Muti quite surprisingly sings every line that will be taken not only by the chorus, but as they are introduced, each and every character in the opera, even Lady Macbeth.

It is an astonishing one-man show and the players are having as much fun watching it as Muti is performing it. When Muti isn’t singing the lines over the orchestra, he tells crucial story details to influence the kind of sound he wants for given scenes.

“Will you be evil enough to be great, Macbeth?” asks Muti, imitating Lady Macbeth, “you know, like today’s politicians. Am I allowed to say that many times the husband is weak and the wife is strong like these characters? Am I right, ladies?”

Considerable attention is given to the sound of the knock of the door after King Duncan has been killed in the Macbeth castle. “That sounds like a knock close by, but this is a knock from another world, a knock of imagination.” After the rehearsal, Muti will go and investigate ways to get the sound of the knock, supplied by a percussionist offstage, much lower and more mysterious. “You know, always think ‘inferno’ with this opera.”

After an entire day of rehearsing Acts I and II with the orchestra alone, the Symphony Ball is held the following day, also an all-Verdi affair, including the ballet music from “Macbeth” and a party for all involved at the Palmer House.

The orchestra will have Sunday off, but not Muti. He is up early Sunday morning meeting with the soloists of the opera together for the first time in Buntrock Hall, taking them through the solo sections of Acts I and II scene by scene and line by line with Muti himself at the piano, reading from full orchestral score.

Although most of the soloists are native Italian speakers, Muti makes constant suggestions on what syllables should be emphasized, always carefully indicating the mood and the dynamic level needed.

“The Act II brindisi,” Muti suggests to soprano Tatiana Serjan, who is singing the role of Lady Macbeth, “is generally done like ‘traviata,’ but this is Scottish. It is like stones.”

The afternoon is spent with a piano-chorus rehearsal. “I want you not to be a symphony chorus, but an opera chorus,” says Muti. “This is not ‘Ein deutsches Requiem.’ Sing it as you feel it, every member of the chorus as an individual.”

When the women of the chorus start to sing the first witches’ chorus, Muti suggests they are singing too prettily. “You are witches, no?” he asks. When some titter, Muti qualifies, “I mean in the opera, you are witches. Verdi writes, ‘staccato.’ Don’t sound too beautiful. Sound messy, but together. Don’t be too ‘nice.’ ”

During the Act II finale, Muti reminds the chorus during a pull-back passage that “when words are broken, it is as if you are so moved you cannot get out the words. Put some air there, as if you cannot speak. This is also true of Bellini and Donizetti.” 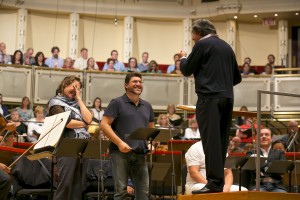 At the end of the day, Muti works with members of the chorus who have small solo roles, as well as the children who will sing the apparitions. He sits down and greets and shakes hands with each individually before they sing their bit parts with Muti at the piano.

After a complete run-through, Muti works with each as carefully as he does the international opera stars of the production on every line of their pronunciation and dynamics.

When all have finished and left, Muti places the score flat down on his podium and sits down on top of it to relax for a moment, placing his hands over his face for a moment of composure. “This was supposed to have been a Sunday,” he says, looking up.

Monday is another full day with the orchestra alone, Muti carefully working through Acts III and IV and again singing the choral and solo parts and explaining every scene.

Monday evening, Muti goes through Acts III and IV with the soloists in a backstage rehearsal room. Things are progressing so well with the soloists that planned Tuesday and Wednesday morning rehearsals with them alone are cancelled.

Tuesday afternoon brings soloists, chorus and orchestra together for the first time. All of the elements having been carefully prepared separately, the act of placing them all together and smoothing out all of the seams and transitions to Muti’s perfectionist standards remains a formidable one.

Muti makes formal introductions of each soloist to the orchestra. When the first big aria of the opera is sung full out for the first time by Lady Macbeth after reading her husband’s letter, Serjan is visibly touched by the spontaneous applause that erupts from orchestra and chorus members.

Among the concerns of the day, which will only get through Act I, are to coordinate and integrate an offstage band separately conducted that greets the arrival of King Duncan to the Macbeth castle. “Remember,” Muti cautions, “a king is coming, the sound needs to reflect that.”

Wednesday is spent going through Acts II and III in the early afternoon and Act IV and additional clean-up from earlier acts into the evening before Thursday’s late-afternoon dress rehearsal which will be followed by a day off for everyone before the first performance on Saturday. Sunday will be a day off for the orchestra, but Muti has agreed to perform at a prison, and has talked the soloists into joining him. The music will include Verdi, of course.

“It is interesting that Verdi was so ahead of where opera was at this time,” says Muti. “He asks for ‘voice without sound,’ and then from there, a diminuendo! How can you have a diminuendo from silence? That was impossible to do because it was too modern. Much of the public would not understand. They still don’t and so it is not done as Verdi wrote it. That is my struggle. That is why I say Verdi is the composer of the future, because his riches are still yet to be discovered.”

“Macbeth” will be performed September 28, October 1, 4 and 6 at Orchestra Hall at Symphony Center, 220 South Michigan. (312)294-3000. A sold-out Muti/CSO performance of Verdi’s “Requiem” will be broadcast live in Millennium Park’s Pritzker Pavilion and streamed across the web at 7:30pm on October 10, Verdi’s 200th birthday.