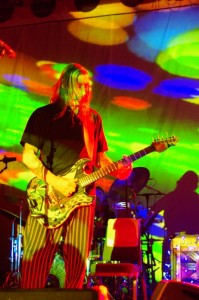 Maybe there are better known and better respected heavy psych bands out there, but none with as persistent a vision as Britain’s Hawkwind.

The ensemble has counted dozens of participants, with guitarist and songwriter Dave Brock being the most constant stimulus to recording and touring since 1969. Despite the frequent turnover, Hawkwind has attached itself to a sound equal parts komische and UK psychedelia. Other bands continue to mine the troupe’s approach for inspiration, but Brock and company remain a singular entity among festival freaks and would-be psychedelic cultists.

Hawkwind’s 1975 “Warrior on the Edge of Time” is ready for re-release after spending nearly a decade out of print. While the band’s only chart success came several years earlier, on a track helmed by future Motörhead frontman Lemmy Kilmister, “Warrior” exudes sci-fi weirdness and wild riffing tantamount to anything Sabbath was capable of. Maybe all the supplemental electronics were a bit much at the time of its release, but the up-and-down sprint of “Opa-Loka” should be heavy enough for anyone with a reserved appreciation for synthesizers.

“It had been stuck away,” Brock says of the original “Warrior” tapes. “And eventually our manager got it together with Cherry Red [Records].”

The current incarnation of Hawkwind, including dancers and a light crew, counts about ten people, all dedicated to crafting a stage show to extol the psychedelic virtues of the ensemble’s 1975 work. Brock refers to the album as “the last part of the jigsaw puzzle from the seventies.” And while it was the final album featuring Lemmy on bass, Hawkwind issued several additional long-players during that decade. The slinky “Quark, Strangeness and Charm” is a highlight among them, showcasing Hawkwind’s taut rhythms, yet revealing some tangential relation to the burgeoning post-punk of the time.

“We were doing that before they were doing that. [The Buzzcocks] used to come and see us,” Brock says, pushing out an exuberant laugh. “I know Pete Shelley. We actually toured together. And the Sex Pistols. … They all used to come see us play, drop acid and fantasize about being rock ‘n’ roll stars.” 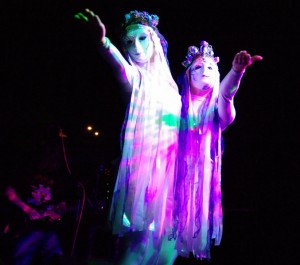 Regardless of its fan base, Hawkwind persists, creating its own ideals and churning out music Brock describes as trance-like. There’re limits to what can be achieved in any space-rock outfit, but the guitarist and band leader seamlessly integrates his adherence to propulsive rock stuffs with an appreciation for the music he canonized in his youth.

“You get a style of playing, you just sort of carry on,” he says of molding Hawkwind’s sound. “I used to listen to a lot of blues when I was young … I actually played with Memphis Slim, who was a boogie piano player. … Memphis Slim was just playing piano by himself. And I had a friend who would play at a jazz club—we used to do the interval spot. So, Memphis Slim asked if we wanted to play with him, and we said, ‘Yeah.’”

Navigating the music business for about forty years has found Brock working alongside dozens of performers. While he excitedly recalls performing with American blues players and Cream’s Ginger Baker, he says it’s just about impossible to get on with everyone. And Nik Turner, Hawkwind’s first sax player who appeared on the live 1973 “Space Ritual,” as well as “Warrior,” is apparently one of those whom Brock couldn’t maintain a working relationship.

After a stint in the ensemble during the early seventies, Turner rejoined Hawkwind for a few years in the following decade. But that was almost thirty years back, which is why Brock is confounded by the sax player, now based in Los Angeles, applying for the U.S. copyright to Hawkwind.

“He isn’t the band Hawkwind,” Brock says. “If you’d been in a band for forty-four years, and a guy who was in it six [years], someone you haven’t seen in thirty [years], and he suddenly decides to take the name of the band … We’re not your average band. He’s gonna cause a lot of trouble for himself.”

Further complicating matters, Turner’s own troupe is embarking on a tour overlapping Brock and his ensemble’s jaunt—he’ll be in town as Nik Turner’s Space Ritual on October 21 at Reggie’s. That could be a simple coincidence, though it may just as well not be. Turner did not respond to a pair of emails requesting comment.

It all sets up alternative Hawkwind universes and creates a potentially caustic landscape for fans to navigate. But the music world rewards creativity, and even after so many years performing as Hawkwind, Brock’s confident in his ability to further the legacy he’s helped create.