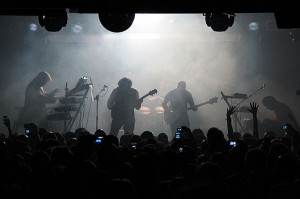 If there’re folks who sit down and listen to a Goblin album from beginning to end, bless ’em. For the most part, the Italian prog ensemble trucks in truncated soundtrack stuffs best suited to murder scenes and creeping ghouls. Hooking up with the culty Dario Argento for his best-known works, the band earned acclaim in its own country immediately, seeping out slowly into the rest of the world’s consciousness as the director’s “Suspiria” became requisite viewing for film enthusiasts. Thing is, when listening to the soundtrack as a whole, quick transitions meant to signal something visual are left flailing on their own—“Black Forest” and its jazz-cum-rock guitar jam included. No doubt, these dudes shred, but if shredding is all it took for a performer to be enticing, we’d all be psyched for some new Yngwie Malmsteen (Sorry, Yngwie.). Goblin’s most enduring pieces of music, though, come from its first soundtrack, the 1975 “Profondo Rosso.” Portions of the title track function as some of the darkest fusion set to tape, and “Death Dies” could have made a German band’s career. Instead, it’s lost in the miasma of two-minute interludes. The funky drumming and persistent piano could have been dropped into a Billy Cobham session instead of being overlaid atop hatchet murders. Of course, all of that was conceived a lifetime ago, with a few cuts being re-recorded for a pending EP. Up until 2009, Goblin hadn’t been concerned with touring much, or even maintaining a cogent lineup. But for the ensemble’s first U.S. tour, three prime movers from the group’s first few years are set to appear: Claudio Simonetti, keyboards; Massimo Morante, guitarist; and Maurizio Guarini (yes, another) keyboardist. And because of the peculiar nature of the entire endeavor, $75 VIP passes are being offered. Secret Chiefs 3 open. (Dave Cantor)