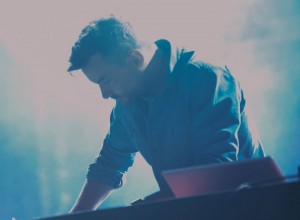 There’s a fine line between the perfection of chill-out music and the type of cheeseball production often heard accompanying nature documentaries. Bonobo, an English beatsmith named Simon Green, has appeared on both sides of the divide. His latest disc, “The North Borders,” doesn’t stray far from the tuneful electronics of his efforts dating back a decade, but with each successive long-player, Green insinuates more and more guest vocalists into the mix. Snagging Erykah Badu for a guest spot isn’t gonna do much else other than engorge record sales, and the effort’s a neosoul deal not necessarily sonically cogent given the album’s remaining instrumentals. When including crooners on his tracks, Green tends to pull back, allowing the performer to mark each song with his or her own style. It’s a thoughtful musician’s move, but results in some ambient moments easily overshadowed by largely instrumental tracks like “Jets” and its accompanying wooden drum sound. Even as Green continues to excavate subtle new strains of low-key productions, sections of “Borders” become the distant cousin of 2000’s “Animal Magic” and its gently wavering tones. There’s a lack of propulsion on this latest disc, leaving longtime listeners wanting for tunes like “Terrapin,” which at least exhibits a tenuous tie to hip-hop’s boom bap. “Ten Tigers” gets moving in a classic Prefuse 73 kinda way, but “Cirrus” and “Don’t Wait” hedge toward the overly avuncular. It’s short of boisterous, and something you’d hear at a club where drinks are too pricey, everyone’s snobby, there for the booty, and not to witness the subtlety of a producer’s electronic gestures. The folksy Grey Reverend opens. (Dave Cantor)