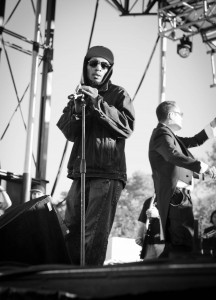 Cordoning off the Deltron 3030 project from the rest of Del tha Funkee Homosapien’s work is a tough task. When initially released, Del was about to embark on his Gorillaz odyssey, but was also engaged with his “Both Sides of the Brain”-era material. It was a watershed few years for the East Bay MC. And it’s because of that few years—not to mention raucous classics like “I Wish My Brother George Was Here” and “No Need For Alarm”—that the last decade seems like a letdown. Teaming with Def Jux should have resulted in a classic, but “Eleventh Hour” was a truncated mess. The litany of mixtapes and collaborations didn’t do much either, apart from necessitating trips back to those aforementioned nineties classics. So the news that Del, Dan the Automator and Kid Koala were set to revisit 3030, and in the company of a huge orchestra, came as a comforting bit of news. To have Del and the Automator tell it, “Event II” is better executed than the initial 3030 album. It’s hard to find a hook, though. “Nobody Can” tries pretty hard, but Del’s out-of-key caterwauling doesn’t help much. Neither does the MC talking about the avoidance of corporations while having a guest vocalist who’s issued work through Red Bull’s imprint. Picking apart “Event II” isn’t difficult—nothing approaches the genius of “Upgrade” or “Virus.” The heady rush of discovery isn’t there; it’s a sequel. And being bogged down by a barrage of guests and skits (even if David Cross is included) doesn’t make matters any better. Bearing witness to this troupe backed by a huge clutch of musicians, though, can’t be a letdown. Recent recordings notwithstanding, Del’s still more than a rapper—he’s a writer, a thinker and a critic. Sometimes, it’s just hard sifting through the detritus. (Dave Cantor)