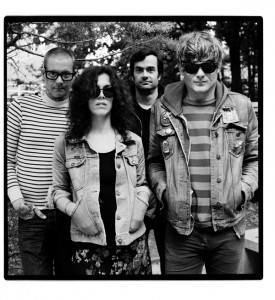 Just like on past albums, concept and cadence on “Floating Coffin” have been thrown into the woodchipper and expectorated. Or, imagine a game-show wheel with narrow pegs jutting out along the circumference of its pizza-sliced face, and the labels fuzz rock, psych-folk, psych-pop, garage, punk, noise, children’s songs and Krautrock tapering into the center. The wheel is spun and an excitement of the outcome builds, only there’s no stopping device. The wheel remains perpetually unpredictable. This is how Thee Oh Sees have proven that time, not concept, is all they need to be a truly great band.

Many songs stay true to the band’s favorite topics: death, murder, madness and the subconscious. Dwyer’s delivery is perfectly synced with vocalist/keyboardist Brigid Dawson to achieve an eerie cartoon-like falsetto. Melodies alternate between high and punchy, or thick and grungy, all laden with land mines of sitar/psych influenced power chord solos. They hit hard and loud with impulsive transitions, dramatic distortions, and an overall sound like the album was recorded on equipment dusted off after forty years in storage.

While not every listener can decide precisely how they feel about the breadth of Thee Oh Sees albums past and present, most agree that their shows are the kind that swell up and sweat out ferocity. Expect loud; expect energy; and at the end, be happy you were a part of it. OBN IIIs and The Blind Shake open. (Jessica Burg)