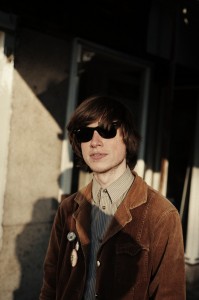 Camped out at the Shadow Shoppe, a recording studio doubling as a residence in an industrial area near Amsterdam, Jacco Gardner’s been burrowing into an insular universe.

It’s a place the multi-instrumentalist has been exploring for almost a third of his life. And it’s been fully realized, in musical terms, as “Cabinet of Curiosities,” which Chicago’s Trouble in Mind issued Stateside earlier this year.

With the album’s release, Gardner’s granted listeners access to a collection of vivid “fairytales,” as he calls them, each recorded on his own at the Shoppe, save for the disc’s more complicated drumming. The work’s been cobbled together over the last eight years, drawing from the more baroque moments of sixties pop music. There aren’t any distinct hints of contemporary Europe in Gardner’s songs, and an unknowing listener could easily mistake just about anything “Cabinet” offers as a selection from the first psychedelic era. It’s more than mere retread, though—it’s a twenty-four-year old’s imagination splayed out over twelve tracks. But “Cabinet” would warrant notoriety even if Gardner hadn’t played guitar, bass, keys and a variety of synthesizers.

Despite his ostensible squatting, his homeland Holland has embraced “Cabinet,” sending Gardner on a series of TV appearances and performances at venues that would overwhelm U.S. musicians of comparable popularity over here.

“I mostly play in bigger venues … there’s actually a lot of high-end venues in every city in Holland,” he says. “In December, I’m going to tour around those venues … there’s not really any of those arty, underground venues [here] anymore.”

Garnering crowds of about a thousand folks isn’t what platinum record sales are made of, but the sort of ornamental composition Gardner trucks in sits alongside Euro-acts like Dungen, a Swedish group he excitedly confesses to being a fan of. A substrata of listeners stand readymade for “Cabinet.” Gardner, though, remains awed by his relative success in Holland.

Before discovering the appreciation his music has secured in the Netherlands, he went the traditional route, working on a degree in music production. As stultifying as that sounds, the would-be producer took the time to figure out what he wanted to investigate further and ferreted out new knowledge while simultaneously tending to coursework.

“It did restrict me in some ways,” he says of proper schooling. “There were other things that I wanted to learn that they didn’t teach me in school. And I was really bothered by the fact that I had to learn a lot of things I wouldn’t be using; like recording something in surround sound for DVD.”

Motivated by his own curiosity and a backlog of producer-heroes, Gardner set about re-examining songs he’d been writing and rewriting since his teen years, picking up friends at school to help him perform the compositions in a live setting. The issue then became how to incorporate the bevy of instrumentation into an ensemble small enough to tour internationally. 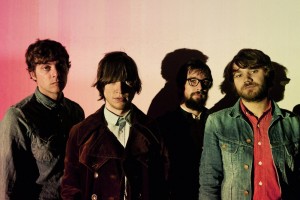 Gardner started by trying to program keyboard and synthesizer parts and triggering them as he sang. That didn’t last too long.

“It doesn’t feel natural to me to express myself with four different … keyboards, with a laptop,” he says of devising “Cabinet” as a series of live endeavors.

Discovering a happy balance, Gardner’s sophomore trip down America’s highways will include a second keyboard player, allowing the frontman to concentrate on doing justice to his life’s musical summation. It’s a collection reflecting a maturing musician’s trip through school, life and figuring out music.

What’s surprising, though, is that with so much time invested in writing these eleven stories, the title track’s an instrumental number.

“I had a quite clear visual image when I made that song,” Gardner says of “Cabinet of Curiosities.” “It’s from a time when dreams and reality came together in a way … like the first [explorers] who saw an elephant, and they made a drawing of it. It looked like a monster.”

Opening with a wailing baby, “Cabinet” is one of the album’s shortest tracks. An introductory portion of the song takes up about thirty seconds before Gardner wades through to the song’s mod-intentions.

“It’s actually about a girl who—kind of an ‘Alice in Wonderland’ kind of girl—who goes on adventures and collects creatures that she finds very strange and kinda scary,” Gardner says, without explaining why the cooing child returns with about forty-five seconds left. “She just displays them in her own sort of cabinet of curiosities.”

A “Lullaby” crops up five minutes later, opening with a promise of marriage; something suited to a young girl’s waning moments of consciousness before drifting off to sleep. There’s a lack of propulsion in Gardner’s songs meant to evoke our collective childhoods. Forceful bass parts, something that ties “Puppets Dangling” to his sixties inspirations, are absent here. Those unencumbered moments allow Gardner’s stories room to breathe, develop, and become recurring visions.

If there’s another clutch of narratives waiting—and the songwriter says there is—hearing what sonic caveat it explores will be the listener’s own trip through realization.