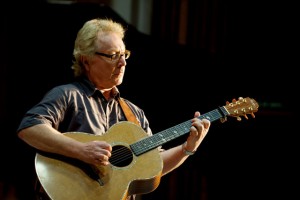 Irish singer-songwriter and rocker Paul Brady has been doing it well for almost half a century. “Chicago is a very educated crowd, they know their music,” says Brady about his November 1 show at Chicago’s Old Town School of Folk Music with local stalwart John Condron opening. Brady says that the blues played a large part of his set when he was younger. “I have about eighty percent of my solo set down when I get there, and depending on the audience, perhaps some of the Irish tunes, or maybe some old blues; there is always this ‘bleeding noise’ from my past songs saying, ‘hey, what about us?’”

Brady’s catalog is substantial. With more than fourteen albums, including his most recent double-CD compilation “Dancer In The Fire–A Paul Brady Anthology,” Brady’s style is hard to pigeonhole. From Northern Ireland, he is one of the island’s most enduring contemporary musicians. Fellow Irishman Bono of U2 offered that Brady is, “The iron fist in the velvet glove of Irish music,” and no less than Bob Dylan revealed, “Some guys got it down, Leonard Cohen, Paul Brady, Lou Reed, secret heroes.”

In addition to Brady’s current solo tour, he will be playing with another admirer, Bonnie Raitt. Says Brady, “A lot of my writing is for bands, larger pieces. So, I’ll open up with a solo show, and then I’ll do two or three songs with Bonnie and her band—‘Not the Only One,’ or ‘Luck of the Draw.’ We played together last July in Dublin and then New Zealand.”

Raitt has commented on Brady’s brilliant use of melody, and such luminaries as Tina Turner (she has covered “Paradise is Here”) and Santana (he has covered “Night Hunting Time”) have joined her in regularly performing Brady’s tunes. Brady himself has had a recent hand in covers with the popular television show “Sons of Anarchy,” which used his version of “Gimmie Shelter” in an episode. “Last season, the show was set in Ireland. And when they [the characters] were in pubs, you’d hear my music in the background, or see my name in the jukebox. The director of music asked me to cover ‘Gimmie Shelter’ for the show … I said sure, I like the Stones.” 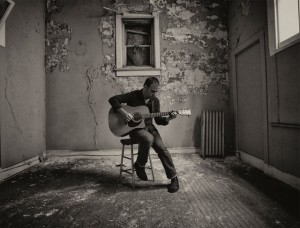 Opening act John Condron, a Chicago musician by way of Philadelphia, recognizes the pattern. Brady’s songs have been bringing inspiration to audiences and other musicians alike for some time. One of his most popular songs “Nothing but the Same Old Story,” has been in Condron’s set for several years now. “I first heard it in Ireland a number of years ago; it was Mickey Joe Harte covering it (before I knew Mickey) and it just got under my skin.” Since that time, Condron has traveled to Ireland to co-write and perform the song “The Gathering” for the Irish Tourism Office, with Paul Brady and Mickey Joe Harte as collaborators. Condron recently played at The National Concert Hall in Ireland, Milwaukee Fest, and opened up for musician Joseph Arthur at Lincoln Hall. His most recent album, “If Anything Or At All” (Flipside Records) is “a ‘taking stock of life this far’ collection of songs.”

Brady had some recent shows at The Irish National Concert Orchestral Hall where longtime fans brought their kids, “It’s great. To see generational, father and sons or mother and daughter, dancing to songs that they love,” he added. On the topic of young musicians, however, Brady becomes reflective,“I also work with a lot of younger musicians. No one can avoid the downturn in the music industry, I feel bad for the youth. I’ve built an audience over the last forty-five years. I’ve gotten out there.”

The show at Old Town School of Folk Music promises to offer a collection of contemporary and traditional music that spans Brady’s forty-five year career. Add one of Chicago’s hardest-working gems, John Condron, and it promises to be one of those nights that fans can’t help but cover in conversation afterward.