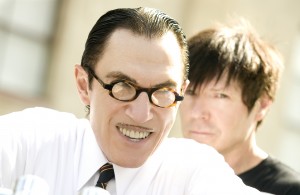 It’s all been vaguely pervy over the last four decades for Ron and Russell Mael, the brothers behind whatever Sparks has become. Beginning around 1971 as Halfnelson, the pair, backed by an occasionally muscular, glammish rock troupe, issued a disc that no one particularly cared for at the time. Luckily, having Todd Rundgren’s name attached as producer gave ’em a second shot, and the album was reissued the following year as the self-titled “Sparks” disc. Tracks like “Roger” work through a Bowie-esque pop sensibility while engaging enough obtuse experimentation to warrant the bizarrely timed reissue. The same year as Sparks’ second go-round at a first album, “A Woofer in Tweeter’s Clothing” saw release; without Rundgren’s patronage. The disc continued along with similar musical and lyrical motifs, including album-closer “Whippings and Apologies.” Some stringed accompaniment crops up on “Here Comes Bob,” which perfectly matches Russell’s high-pitched crooning, but Sparks remains revered for its 1974 “Kimono My House”—an admittedly ingenious title. What might account for the album’s relative popularity is each composition sticking to a hard-rock style rather than to the more fey Brit-inclined appropriations of those earlier efforts, which is somewhat ironic, seeing as by this point the brothers had relocated to the UK and began employing British players. Scoring a chart hit with that effort didn’t solidify the Maels’ approach to songwriting, moving on to “Big Beat” and eventually the genre-anticipating “No. 1 in Heaven,” which takes pop music toward an electronic frontier. Of course, the Maels are still recording new work—the pair’s latest studio release is an odd homage to a Swedish director, “Seduction of Ingmar Bergman.” Fully orchestrated but still integrating some of those electronic flourishes that made Sparks notable in the late 1970s, the disc pretty easily shows that the brothers’ well of creativity hasn’t diminished—like the width of Ron’s mustache. (Dave Cantor)