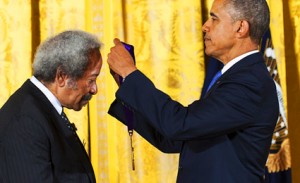 In a moment of monumental historical import, this past summer President Obama slipped a National Medal of Arts around the neck of Allen Toussaint. Two centuries into America’s existence, the nation’s most prestigious artistic ceremony provided the backdrop for a scene of reckoning. The highest political authority in the land, a position formerly held by twelve different slave owners, was now embodied by an African-American for the very first time. President Obama warmly greeted his cultural counterpoint in Allen Toussaint, the epitome of the port city New Orleans, former epicenter of America’s slave trade.

Whereas the horrors of history would seem to have rendered the momentous encounter impossible, Toussaint offers some unique insight into the occasion, “Everything has its origin, and its birth. Just like the birth of a child, there’s really excruciating pain before the miracle happens, and then when the miracle happens, whatever pain that was, it was worth it all, whatever that seemed to have cost.”

A conversation with Toussaint defies the poignancy of American history. Though he is the premier artist of a city beset by both manmade and natural disasters, the most common adjective he uses is “joyous.” It’s a remarkable trait, to turn hardship into happiness, brutality into ecstasy, and the talent seems native to New Orleans. His recent release, “Songbook,” chronicles a five-decade-long career at the forefront of the endeavor. The producer and songwriter may have topped the charts with hits like “Lady Marmalade,” but the beginnings of his work were much more modest.

“Since I was always playing the piano, even as a youngster there would be kids in the neighborhood, and people nearby who would sing, would come over to my house and my parent’s house and we’d just play along and sing along to have a good time. And even after we got started recording with the company, these artists like Ernie K-Doe and Irma Thomas and Aaron [Neville] and Benny Spellman, they would all be there at the same time, and I would write one song for one artist and everyone who was in the room would sing backup behind that just to play around, and we’d take that to the studio. On some of the early recordings by Aaron Neville you might hear Irma Thomas in the background. Things like that happened.”

Toussaint has a characteristically nonchalant delivery when he recounts this memory, but these collaborations are the culmination of the Crescent City’s (and thereby the country’s) unique artistic legacy. The birth of jazz, blues and, in turn, r&b, rock ‘n’ roll and soul can all be traced down the Mississippi River and into the expression of Toussaint and his antecedents. Early sixties jukebox hits like “Mother-in-Law,” “Ruler of My Heart” and “Lipstick Traces (On A Cigarette),” are all amalgamations of the times, past and present, and still sound as vibrant today as when Toussaint first wrote them. That sound—the New Orleans sound—is worthy of a careful listen, as its reach is felt through every vein of American musicality. 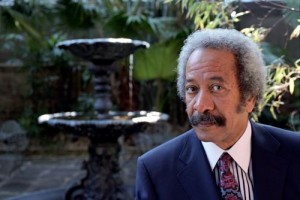 Opting out of traditional methods of instruction, artists like Toussaint took to their surroundings for inspiration when learning how to play. Without classical vernacular, the description of their efforts proves elusive, though Toussaint largely credits Professor Longhair’s mix of Tuts Washington’s junker blues with rumba rhythms (music indigenous to Cuba) as the impetus for his style of play. He continued, “The other is we’re largely inspired by the second line street-band parades, for one thing, and that kind of strut that they do, and this kind of strut that they did on the way back from the old funeral grounds many years ago. And we have the Mardi Gras Indians. We have that frenzied percussive life that the Mardi Gras Indians live with, and their music is with a whole different reason for being.” This is where a uniquely American complexity of cultures comes to light.

The Mardi Gras Indians carry on a tradition begun in the eighteenth century, wherein slaves would gather in Congo Square on Sundays for their one day of freedom each week, to dance and celebrate and triumph in the face of tragedy and trauma. The importance of the catharsis provided by this ecstatic release cannot be overemphasized, and carried over into second line parade struts. In New Orleans, the impromptu second line paraders follow the first line of permit holders, i.e. those officially recognized by political authorities. It is believed that the practice may be born of West African circle dances maintained by slaves, and forcefully straightened out into line formation to abide by military brass band traditions of Europeans and white Americans. To underscore the severity of the stakes in this type of expression, there was a time when the city banned the struts for fear they may incite violence.

All that fear and frustration yields beauty and bravery, and culminates in a brand new Toussaint track making its debut on “Songbook.” An ode to The City That Care Forgot, “It’s A New Orleans Thing,” is a truly joyous jaunt down the shaded streets of a city, which like our country, still bares the scars of slavery, albeit as a triumph of cultural expression instead of a source of inexhaustible shame. For this, Toussaint’s tremendous legacy will continue to build and, as the seventy-five-year-old remarked, there’s no stopping now: “I have a new piece that I’m doing with Joe Henry as producer, and we’ve recorded seven songs of just piano solo as well, and we have a few more to do, and that’ll be released sometime in the coming year.”