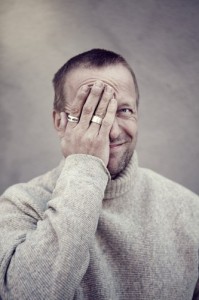 At the forefront of Herculean horn playing stands a sweaty Mats Gustafsson, eternally finishing up his latest saxophone symphony. The prolific Swede performs with enough muscularity to rival Schwarzenegger. He plays with the force of a jet engine, and given his recording schedule, he’s busier than most airports. Just shy of age fifty, this year alone Gustafsson has contributed to fourteen different releases, ranging from playful free jazz collaborations with Chicagoan Ken Vandermark on “Verses,” to noise experiments with Merzbow on “Cuts,” to duo work with Sonic Youth’s Thurston Moore on “Vi Är Alla Guds Slavar.” His unceasing care for the craft has yielded two outfits in particular, Fire!, and The Thing, which have both garnered worldwide acclaim.

Fresh off remarkable recordings with experimental stalwarts Jim O’Rourke and Oren Ambarchi, Fire! released two full-length records in 2013—one as a thirty-piece orchestra, and another as a slimmed-down trio—both efforts among the finest free jazz releases this year. An upcoming album from The Thing, appropriately titled “BOOT!” sounds like jazz and punk got into a street fight. It’s a surprising set from a band whose last outing was a collaboration with vocalist Neneh Cherry (yes, that Neneh Cherry, of “Buffalo Stance” fame), a collection of unpredictable avant-garde jazz covers from source material as desperate as The Stooges and Madvillain. The Thing, after all, formed to explore the work of Neneh Cherry’s stepfather, legendary trumpeter Don Cherry, whose methodology was firmly embedded in experimental expression.

Much of the output is exclusive to vinyl, the medium Gustafsson most prefers: “The process of making a vinyl is so much more creative, takes [more] time, with test presses and all. And it should take time. That is the whole key to it. Good things take time. There is no way around that. Things [go] way too fast these days. On all levels, in society, in life overall… things are supposed to be super efficient and fast, and I just feel sick about it all.” Moreover, the format allows for a clear monetary exchange, as records are much more difficult to pirate over the internet. “The process of making a vinyl is a statement as well, as a better medium to present the music within. If the download [circus] would be better for us artists, it would be an ideal complement. But, now, we don’t get shit from this. No money to make new productions and stuff—the money just disappears. Never ever reaches the artists. I had my first royalty check from downloads last year. After all the releases I have done, eleven cents total.” Which isn’t to say Gustafsson is hopeless. With a wry sense of self, he immediately offers his investment plan for that eleven cents. “I’m thinking of investing in a new studio. A small one.”

It didn’t exactly pan out that way, but The Thing has started their own record label to release “BOOT!” as well as to reissue their back catalog. Why now? “Well, simply because we wanna take back control, and make the decisions ourselves again, along the whole line in the process of the makings.” Gustafsson understands the workings of The Thing in a similar light, “a process works in the way that all your past experiences will come out in the next one. The music of The Thing has changed over the years, and will hopefully continue to change and deepen itself. We never really plan. The music takes us to where it has to. That we would make the rawest and most hard-hitting album as of yet, and playing only two covers, and those being classic jazz tunes? [laughs] That was never in the plan.” 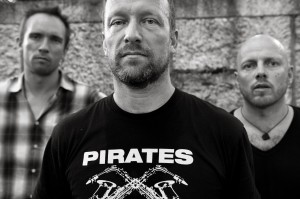 The covers in question, John Coltrane’s “India” and Duke Ellington’s “Heaven,” are among the most cherished harmonies in the idiom. The Thing turns these standards inside out, revealing their raw power and pure strength. Featuring some brawny blowing from Gustafsson laid atop a rhythm section of absolute barnburners in bassist Ingebrigt Håker Flaten and drummer Paal Nilssen-Love, “BOOT!” is a revelatory listen for the crossover from free form jazz to noise rock and back again. The blistering combination won’t last for long. Per Gustafsson: “the next album will be something totally different of course… maybe us all three playing banjo?”

2014 offers another long list of promising collaborations. Gustafsson hints at a project with Fugazi’s Guy Picciotto, a new piece “Hidros 6 – KNOCKIN'” dedicated to the one and only hero in his life, Little Richard, a solo album with Corbett vs. Dempsey’s record label and, as he states with particular enthusiasm about a city and an artist that have forever changed his career: “There are always plans to continue what was started in Chicago twenty years ago with Ken Vandermark!”

“BOOT!” is out November 12 on The Thing Records.