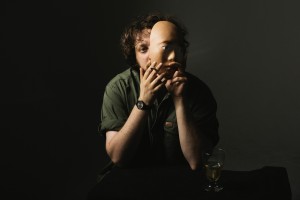 Trippy visuals broadcast upon an electronic musician pushing buttons to trigger recorded sounds is about as appealing to the average concertgoer as staying home to stare at a screensaver. Given that experimental linchpin Daniel Lopatin’s Oneohtrix Point Never project is carefully conceptualized to forgo the robotic rhythms of dance, it’s alarming that he would continue to arm his android impulse with the same performance tropes as his EDM counterparts. To be sure, Lopatin is after something different, elusive, abstract—he’s trying to get your brain to dance, not your body. To this end, Lopatin’s work has become increasingly pastiche, building off the digital glitch programming that Mego label-mate Jim O’Rourke’s “I’m Happy and I’m Singing and a 1, 2, 3, 4” spearheaded in skeletal form, Oneohtrix Point Never’s latest “R Plus Seven” sounds downright orchestral by comparison. That is, when it isn’t busy sampling sounds more at home with an eighties public-service video, or overwhelming the listener with Hammond organ drone akin to late-era Talk Talk’s worship of the instrument. The entire enterprise is busy—too busy to be danceable, and too laidback to be breakbeat. So what becomes of the frenetic retro-futurist when he is forced to leave his Brooklyn bedroom for, well, dance halls? If a stint at New York’s Experimental Media and Performing Arts Center (EMPAC) is any indication, collaborations with video artist Nate Boyce and composer/engineer Paul Corley suggest that Lopatin is rising to the task. EMPAC is located on the campus of Rensselaer Polytechnic Institute, a prestigious research university with an emphasis on technological innovation, a serious space for serious works. Lopatin’s performance promises to make use of new venue Constellation like no other artists have, even if it means ignoring the dancers across the building at Links Hall along the way. (Kenneth Preski)