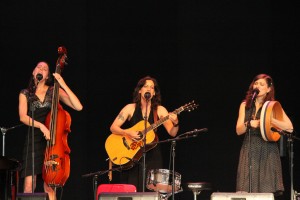 Hearing the Wailin’ Jennys stripped of artifice, unadorned by elements dropped in to make the trio sound more like a country rock band than anything else, is probably the best way to encounter these folk-singin’ Canadians. Spawned from a one-off gig at some music shop, the trio started touring and recording soon after. With its 2004 debut, “40 Nights,” ranking as the group’s most acoustic-focused affair, closing standard “The Parting Glass” best serves to explain the band’s talents. Initially a Scotch farewell song, something from about the same time Robert Burns was kicking around, the tune finds the original trio—Cara Luft’s since split-workin’ it out a capella. Apart from the approach revealing how truly gifted each singer is, the effort’s starkly different than “This Heart of Mine,” off the 2006 followup “Firecracker.” The instrumentation doesn’t ever become overwhelming—there’s a bit of fiddle and some slide guitar added to whatever these ladies would normally be playing. And apart from some of the progression coming off like “Hotel California,” it all just sounds like the group’s talents have been submerged and lost amid studio finery. It’s a purist’s view, but there a story about Woody Guthrie saying folk music shouldn’t be the prettiest thing on the face of the earth. It’d be hard to refute the natural buoyancy of these women’s vocals, there’s just a facet of that lost when surrounded by a bunch of other tinkering. Collectively, they all seem to know that, and include “Long Time Traveller” as the following track, reverting back to the simplicity of just three voices. Splitting the difference, the trio’s last album, “Bright Morning Stars,” ramps up production values and counts a few horns among its thirteen tracks. Regardless of who shows up and what they’re toting, though, the Old Town’s built for shows like this. (Dave Cantor)