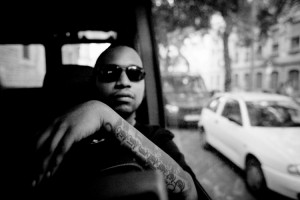 No genre of music has done more to exploit technology than dance. Practitioners have so radically altered the sonic landscape as to render mid-range frequencies obsolete. This is the region of space traditionally reserved for a guitar. Now the sound is maximized at each end of the spectrum, producers opting for punishing squeals of noises that ratchet and reel, high-end frequencies capable of piercing through devastating low-end bass deep enough to rattle your chest. Even vocal samples are subjected to pitch shifting, as much to match tempo as to fit the mix. The music is meant to be physical, hence the overwhelming emphasis on sounds that manipulate movement. From exciting your eardrums to throbbing your torso, if you ever wanted to feel like a vibrating cell phone, you should head to a DJ Rashad show.

Rashad knows much about the impulse to dance. As a member of the House-o-Matics crew, Rashad spent his youth as a dancer immersed in Chicago’s ghetto-house scene—a faster, more aggressive, often explicit take on the post-disco rhythms preferred by the genre’s forefathers. It wouldn’t take long until he became dissatisfied with his role, “I kinda accomplished everything I wanted to do as far as dancing goes, and people wouldn’t take me seriously for doing both, me doing DJing and dancing, so I kinda just like put the shoes down and picked up the needles and took it from there.”

Important to note is that Rashad picked up needles. DJing today is beset by a reliance on technological sophistication. Even if it means more effective sampling, the flip side is less-effective musicianship. Early on, Rashad had to earn it the hard way: “To be honest with you, back then DJing—it was taken real seriously. If you couldn’t mix, if you couldn’t blend, like if your shit was off, you didn’t get respect. It was all about respect. So you had to come to parties and really play your heart out, you know what I mean? And like earn the respect from guys like Deeon, RP Boo, and people like that.”

Earning respect from dancers was equally important. Today, Rashad is world-renowned for his role in the proliferation of footwork, a style of Chicago-born battle dance where feet fly at blinding speeds in a never-ending game of one-upmanship somewhere between tap, break and juke dancing. Rashad is the soundtrack to those battles, productions he refers to as “tracks,” never intended to be commercial, but with a feel too infectious for the mainstream to ignore. The journey to footwork was a long time coming: “Dance Mania [Records] shut down, so that kinda like stopped ghetto house for us as an outlet to put out to the world, you know what I mean? So that kinda left guys like me, Clent, RP Boo, Traxman, Gant-Man, Spinn of course, Jammin Gerald and a couple other people out here just—Puncho, my man Puncho, I can’t forget—just like fuck, we gotta keep it going, you know? So from there, that’s when it kinda just changed to juke.” Puncho and Gant-Man coined “juke,” but the rawest tracks reserved for the footwork dancers wouldn’t be recognized with a genre tag until around 2010.

By the end of that year, London came calling and Planet Mu released the first volume of its “Bangs and Works” series profiling the explosive Chicago footwork scene. The United Kingdom is home to many of the biggest names in electronic music from the nineties (Chemical Brothers, Crystal Method) to now (Four Tet, Burial) and a generation of EDM-salivating fans gobbled up footwork’s infectious raw aggression and untapped potential. It was both fresh and familiar, and by the time Rashad got around to releasing “Teklife Volume 1—Welcome To The Chi,” the genre’s reputation had been cemented far outside of the city limits. Rashad wouldn’t dare leave his crew behind: “We’re all the same group—Teklife—collaborations is great for us because it’s really like a learning experience if you will, an educational tool at the same time. And the vibe man, just to vibe out—and fuckin’, hey maybe today I’m vibing with Taso, he can show me something I never knew how to do on Ableton 9, and maybe I can show him a trick or two on the MP… so when you vibe and collab’, I think it’s just dope because you learn from each other.” 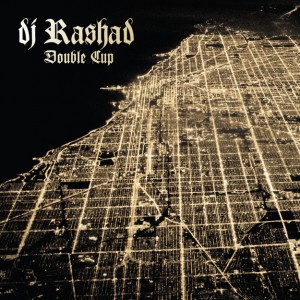 Electronic music naysayers be damned, this is the hallmark of true musicianship. Beyond mere button-mashing, the telltale signs of artistry align when instrument expertise is augmented by a collaborative setting of like-minded individuals striving toward perfection. And Rashad’s latest release “Double Cup” might just be that. Nestled comfortably in a sleek synthesis of house music’s complex history, learned listeners will hear sounds that hearken back to influences as disparate as Phuture, Goldie and Gucci Mane. The sound of “Double Cup” is so seductive that even those whose experience of electronic begins and ends with DJ Shadow’s “Endtroducing..…” will be enamored. Rashad’s craftsmanship has been expertly elevated from the DIY mastering that lent Chicago footwork its grime to wage a full frequency assault on speakers of every quality.

As Rashad sees it, “I just wanted to show love and pay homage to a lot of these genres like jungle, and trap, and everything else, and acid house, that I respect and play as well.” After a victory lap on Chance The Rapper’s Social Experiment Tour, an upcoming headlining gig as part of the Chicago Cultural Center’s “Wired Fridays” is the perfect opportunity for the city to pay Chicago footwork’s prodigal son the same favor.